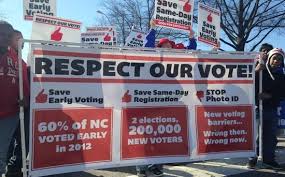 Incidentally -- and this may come as a surprise to the new Director of Elections in Watauga County, Matt Snyder, though we hope he knows by now -- but out-of-precinct voting and same-day registration & voting is still in effect and probably will remain in effect through the municipal elections in November, barring further court action.

Now you'll have to pay close attention to understand why: That paragraph above is true because of a strange combination of federal court rulings in the voting rights case just completed in Winston-Salem. Early last October, the Fourth Circuit Court of Appeals (NC's own Judge James Wynn) enjoined the implementation of the ban on out-of-precinct provisionals and the repeal of same-day voter registration.

For a judge, or a gross of Yer Honors, to change that again before the voting begins this fall would throw even more people into chaos, though it could happen.

Bottomline: Mr. Matt Snyder had better be ready to allow out-of-precinct voters their ballots and to register new voters during Early Voting on the spot.

Posted by J.W. Williamson at 8/16/2015 09:26:00 AM
Email ThisBlogThis!Share to TwitterShare to FacebookShare to Pinterest
Labels: early voting in North Carolina, Matt Snyder, voting rights, Watauga County Board of Elections

I guess it is not a secret any more, thanks to Watauga Watch, lol. This is the way this whole voting thing is going--keep everyone guessing and confused so even if (or maybe for sure) people are following the news they won't know what the rules are and will be discouraged from even bothering to vote.