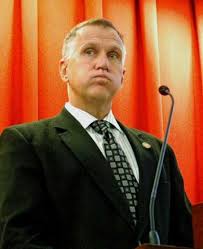 Both our governor and our newest U.S. senator from North Carolina are creatures made in executive suites, cobbled together mannikins who have been cooked up in the laboratory of the rich and powerful to please the rich and powerful. Start with an easy smile, add two glad hands, stir in an empty heart containing a pliable set of values, and behold -- the upwardly mobile politician with no core beliefs other than a willingness to please whoever the calendar says needs to be pleased.

'Course, there's sometimes a downside to being as slick as snot on a doorknob. The true believers you fooled on Monday discover your hollowness on Tuesday, and true believers always consider mere hollowness as out-and-out treachery to the cause.


Although he has only been in the United Senate for under a year, he has wasted no time in moving to the left and allying himself with the Washington Cartel. Presently, Conservative Review gives Tillis a rating of 40% and Heritage Action for America gives Tillis an abysmal 59% conservative rating based, in part, on his votes to extend certain benefits to “same-sex marriage” couples, his support of No Child Left Behind legislation, his confirmation of radical leftist Loretta Lynch to be Barack Obama’s Attorney General and his left of center votes on a number of other issues.

(Should we correct these brethren? Tillis most definitely voted against the confirmation of Loretta Lynch. Naw. The heart believes what the heart needs to believe, and who are we to mess with such vectors?)

McCrory is in similar trouble with the acid-drinkers, mainly because he's just so ... soft and rudderless. McCrory ends up seeming two-faced when he's just confused and scared. Tillis actually is two-faced, and intends to cover his tracks.

Posted by J.W. Williamson at 8/20/2015 10:17:00 AM
Email ThisBlogThis!Share to TwitterShare to FacebookShare to Pinterest
Labels: Pat McCrory, Thom Tillis