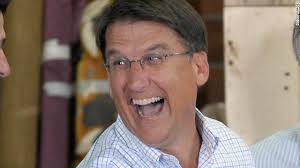 Depend on Governor McCrory to pick a fight with his fellow Republicans in the General Assembly on an issue he could not under statute do anything about ... the "local bill" to redistrict Greensboro's city council to make it easier for Trudy Wade's clones to take it over this fall.

Local bills are not subject to veto by the governor. "I would've vetoed it if I could," sez the Guv, puffing out his chest in that pathetic attempt to seem relevant.

Funny man, this governor. Let's see him veto something he actually can veto, and let's see him raise the stakes publicly for sustaining his veto. Soon, very soon, someone's gonna set a match to this paper tiger.