Boehner: "Who Will Rid Me of This Turbulent Congressman?"

Mark Meadows is only a sophomore in the U.S. Congress -- first elected in 2012 after Heath Shuler gave up his seat representing the 11th District of North Carolina -- but Meadows chose his 56th birthday yesterday to file a motion in the House to "vacate the chair" -- i.e., fire John Boehner from the speakership -- a parliamentary maneuver that has only been used once before in history, in 1910. It didn't succeed then, either.

Who is Mark Meadows? He grew up in Florida, and like all Floridians, he found his way to the mountains of western North Carolina where he settled in Highlands in 1981 and opened Aunt D's sandwich shop.

He's an acid-swilling Tea Partier. Since he joined the House, he... 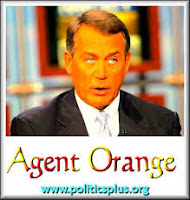 For his pain-in-the-ass uppityness, he got kicked off his chairmanship of a government oversight subcommittee earlier this year -- but only briefly. Other conservative members raised a ruckus, so Boehner reinstated him. That sop obviously didn't work to quiet Meadows down.

At the moment, Meadows is alone -- at least on paper -- in his quest to assassinate The Orange One. One thing you can bet on: Virginia Foxx will not join the revolt unless success is guaranteed. She's totally a "company woman."