Why You Should Never Let Them Privatize Your Water 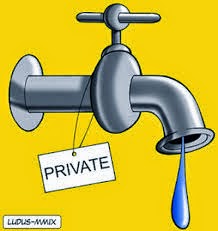 Aqua North Carolina, a private corporation and a subsidiary of a bigger Pennsylvania company, managed to buy municipal water systems in 52 of North Carolina's 100 counties, mainly because local governments, led by people who had no foresight or vision of the civic compact, did not want to fund infrastructure and upkeep for the greater good. Now see what's happening.

Privately owned water resources for urban and suburban communities. Water sold to citizens for profit, not for the civic good. What could possibly go wrong?

Aqua North Carolina convinced the North Carolina Utilities Commission, now under control of the Privatization Brigade in Raleigh, to allow them to increase prices they charge for water (often clouded with sediment and smelly, according to customers) without going through the full cost-increase approval process, which would allow for customer push-back. No, the Utilities Commission decided it could allow for "smaller, more frequent rate increases" while cutting out the public's ability to protest.

Thank God for Attorney General Roy Cooper. He is now suing the Utilities Commission for that particular power-grab (really, for being the hand-maidens and enablers of the water bandits). Gawd only knows how the state's Supreme Court will rule.

It's a fine day in North Carolina when a company like Aqua North Carolina becomes the sole source of water for 250,000 of our citizens, and the state's Utilities Commission allows them "small, frequent rate increases" while silencing the public.

Classic Corporate Fascism WaterBoarding at work on it's citizens.......Yuk!

Access to essential resources should not be for profit.

Yet government bureaucrats can do and take whatever they want - huh?