Nearer, Our Wall Street, To Thee 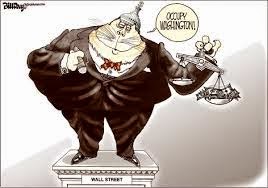 Our own dyspepsia with the Obama administration grew after January 2009 the closer to Wall Street the president cozied up. The damping down of economic populism throughout the Democratic Party, from the top down, is at least partly to blame for the following recent developments: the electoral losses in 2010 and 2014, the blossoming of the Tea Party, and the Occupy Wall Street (and everywhere else) movement. Some of us believe that the loss of our populist edge is largely to blame for those displays of discontent.

Do you hear the loud smacking of lips coming from the canyons of Wall Street at the prospect of a Hillary Clinton candidacy? Yes, it's drowning out progressive and populist groans at the thought of even more sell-outs to the bankers and the other "lords of the universe."

That's why the Elizabeth Warren talk isn't going away. She looks very much like the best potential candidate, with plenty of economic smarts and a toughness of spirit. Hillary is stale bread compared to Elizabeth.

Goddamn it all to hell if this comes to pass. The love of money is the root of all evil. I learned that in Sunday School. If the Democratic Party wants to become fully irrelevant, or merely the semi-official handmaiden to the billionaires (which is essentially what it's been for the last six years), then by all means, Nancy, signal your abandonment of the people by the appointment of Jim Himes as head of the DCCC.

Why "Democratic" consultants aren't able to remember that it is the Progressive, pro-environment, anti-corporatist message that wins is beyond me. Why did Kay Hagan's people not remember that North Carolina voters elected John Edwards to the Senate. Whatever his personal predilections, Edwards pushed a populist, pro-union, pro-environment message. If Democrats needed more Republicans to run, they wouldn't have to vote for Republicans masquerading as Dems, they could just vote for the real thing. Which I guess they did.

Screw the third way Dinos; as you write, they are a losing proposition.

Hard to get Democrats out to vote with Republican policies.