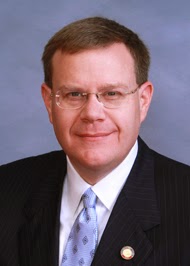 With Thom Tillis gone on to glory in Mugstomp-on-the-Potomac, NC House Republicans met yesterday to nominate a candidate to take Tillis's former post as Speaker of the House. Rep. Tim Moore of Cleveland County won on the first ballot against five rivals.

He's a lawyer. He's a Southern Baptist. He doesn't have his name on a lot of crazy legislation (though, of course, he always voted with the majority on a long list of bad laws since 2011, so there's that). He looks very "establishment," which in North Carolina in this year of our Lord is conservative enough.

The only thing that might prevent Moore from being elected to the speakership (election by the full House will happen in mid-January) would be a behind-the-scenes deal struck between the Democratic minority and a Republican rival to Moore who could get at least 15 other Republicans to buck the caucus. Doesn't seem likely.

Posted by J.W. Williamson at 11/23/2014 09:45:00 AM
Email ThisBlogThis!Share to TwitterShare to FacebookShare to Pinterest
Labels: Thom Tillis, Tim Moore