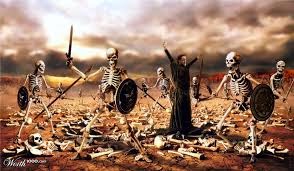 Joseph Palermo, a history prof, offers an indictment of sorts of the contemporary national Democratic Party (which I certainly endorse) and a prophecy going forward if things don't change (hat tip: GC):

Right now we are facing one of the worst configurations of unchecked corporate power, militarism, market fundamentalism, and environmental crisis than at any time in our history, and the messaging coming from congressional Democrats right now appears to be that becoming Republican-Lite is the smart path forward.

The Republican-controlled 114th Congress will attempt to privatize everything from the U.S. Postal Service to Social Security. Senate Majority Leader Mitch McConnell and his associates will try to gut every social program that benefits working people from Food Stamps to Medicaid. They’ll snuff out sustainable energy investments and plow ahead with expanding fossil fuels. They’ll figure out new ways to sell old wars. They’ll push austerity for anyone who can’t afford to attend a $30,000-a-plate fundraiser. They’ll push “free trade” deals that outsource jobs while leaving American workers holding the bag. They’ll slash unemployment insurance and other “entitlements.” And they’ll ensure that our economy continues to work for the benefit of the richest 1 percent.

Meanwhile, what does (and did) the Democratic power players in Mugstomp-on-the-Potomac do, the Claire McCaskills, the Mary Landrieus, the Kay Hagans?

Unlike the Republicans, Democratic politicians seem to always neglect the care and feeding of their own base. They’re quick to turn against any organized movement from the Left – be it Occupy Wall Street, the World Climate Movement, teachers’ unions, students’ organizations, environmentalists, or the protesters acting in solidarity with the African-American community in Ferguson, Missouri – yet all the while they expect to win their votes.

Which brings Palermo and us to 2016 and the prospects of Hillary at the top of the ticket:

Unless Elizabeth Warren or Bernie Sanders jumps into the Democratic primaries and caucuses and give the party’s base something to vote for, the Democratic constituencies will limp into 2016 just as uninspired as they were 2014. The Republicans’ cynical structural advantages they’ve institutionalized in recent years — infinite access to dark money, gerrymandered districts, voter suppression of minorities and young people – will stand rewarded and putting the brakes on the incessant move toward corporate oligarchy in this country will be even harder to fight back against.

It may be slightly different in North Carolina, with a profoundly disappointing first-term Republican governor running against a power-house Democrat who does not yet appear afraid of his own shadow, unlike those national party types.

Yes, please, forget Hillary and give us conservatives Bernie Sanders on the ticket. And bring back those occupy Wall Street protesters. Bernie could make them the hard core front line of his campaign.

I am ready for another Bush!! Jeb, perhaps.