Night of the Knucklehead 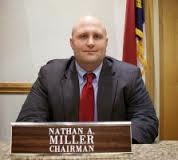 Last night was Nathan Miller's last meeting as a voting member and Chair of the Watauga County Commission. We found out that he had some unfinished grudges.

The Watauga County Planning Commission presented its recommendations for a 90-day moratorium on certain development in the Boone extraterritorial jurisdiction (ETJ) while the Commission grapples with what regs will best serve the residents there. 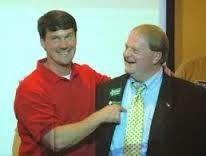 Miller declared that the recent election was the only "referendum" that mattered on Sen. Dan Soucek and Rep. Jonathan Jordan's law in Raleigh denying Boone its ETJ. The people reelected Soucek and Jordan … so there! The people therefore obviously supported the Soucek/Jordan action against Boone, according to Miller.

The fact that Jordan didn't carry Watauga County at all and Soucek only won Watauga by 213 votes would appear to undercut Mr. Miller's "referendum" argument. Commissioner Billy Kennedy pointed out that he got more votes in Watauga than either Soucek or Jordan, so by Miller's curious logic, the county might be a good deal more progressive than Miller wants to believe.

Commissioner John Welch was also not buying Miller's argument. Welch pointed out that this was a low-turnout election, so trying to claim a mandate for wide-open, wild-west, steep-slope & high density building -- an issue that actually wasn't on the ballot anywhere -- was misguided.

The Planning Commission had held three community meetings in the ETJ area, seeking citizen imput about what planning regs would most protect their homes and quality of life. Miller and fellow Republican commissioners David Blust and Perry Yates made a belly-aching show of grief that only 125 citizens -- out of more than 3,000 (probably) who live in the ETJ -- came out to those community meetings, proving -- evidently -- the people don't care what now happens in the ETJ.

Welch directed a question to Watauga Planning Director Joe Furman: "What percentage would you say, of those who attended those meetings, were in favor of keeping the existing development rules in the ETJ?"

Welch turned to Miller. If you want to base assumptions on low turnouts, he said, why isn't that 80% as important as the election results?

There was something like a shouting match after that, with David Blust smugly declaring to Billy Kennedy that he had only won his reelection in tiny little Boone and hadn't won otherwise in the vast Watauga County landmass. Meaning, we have to assume, that in Blust's eyes a vote in Beaver Dam is worth two in Boone, or some such nonsense as that. Otherwise, we think the "one person one vote" principle still rules our democracy.

(While we're all trying to make hay out of election numbers, I really must point out that Mr. Blust won his two-year term on the Commission by a margin of 360 votes, in the whole vast landmass of Watauga County.)

Anyway, there will be a public hearing at 6 p.m. on December 16 on whether the county will adopt a 90-day moratorium on certain development (only the specific items governed by the county's existing High Impact Land Use Ordinance) until the Planning Commission can study and write an ordinance governing the former ETJ. By December 16 there will be a new man presiding as chair of the County Commission … though not necessarily a new political philosophy. It's still a 3-2 Republican majority on the commission, with no significant history of differing very much from "Millerism."

I am afraid Miller has a point. With all the uproar and negative publicity Soucek got over his ETJ removal bill, I was amazed he carried Watauga County. He actually did better in Watauga than he did in 2012 when he lost the County to Cullie Tarilton. This time, I believe Soucek carried every precinct that had ETJ areas.

I would agree with you had he ran against a candidate from Watauga County. His opponent had very little name recognition in the county. He should've won by more.

Actually, Soucek's opponent carried New River 1 and New River 3 too. You won't see that in the numbers for election day, but once you put all the people who voted early back into their proper precincts, you can see Soucek lost those too.

New River 1 is mostly within the Town limits. Soucek carried New River 2 on election day which is probably about half in Town, half out. It remains to be seen if he carried NR 2 after the early votes are distributed. Are you certain about NR 2 or just speculating?

I don't think that they seat legislators based on whether they won certain precincts. To the best of my knowledge, Soucek is going to be our Senator again.

Whining about his winning a few of the liberal precincts in and around Boone won't change the results.

No one is questioning Soucek's big win, especially in Caldwell, Ashe and Avery Counties. Soucek's critics claim that a great majority of ETJ residents oppose his ETJ removal bill.

Then the question becomes why did he apparently carry most if not all of the Watauga precincts that include parts of the ETJ. It's almost impossible to know for sure, but the election results suggest, at the least, that the ETJ issue was not a major negative factor for him among Watauga County voters outside of the Town limits.