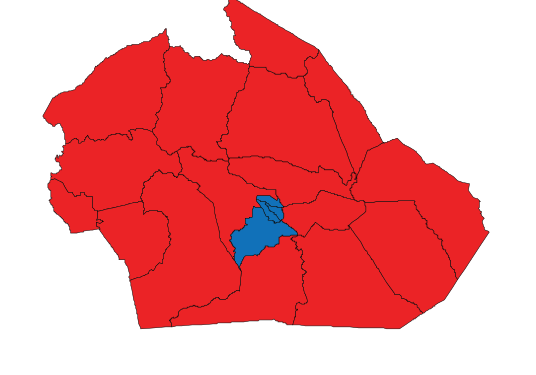 The Watauga Conservative published this map of Watauga County, showing the precincts in and around Boone that voted Democratic this week amid a sea of Republican red. Author "NewGuy" then suggested that Boone is a "cancer" at the heart of Watauga County.

The direct quote: "We are a conservative county with a liberal cancer in it's center!"

Which actually explains a lot about recent GOP activities. It explains why Rep. Jonathan Jordan and Senator Dan Soucek could decide to abuse their power and single out Boone for special punishment among all the cities of North Carolina.

It explains why Watauga County Commission Chair Nathan Miller could abuse his power to deny Boone it's fair share of sales tax revenue.

It explains why Stacy C. Eggers IV ("Four") would conspire with two Republican members of the Board of Elections to abuse their power and apply radiation to the "cancer," an attempt to shrink it down to a size that would fit in one Early Voting site.

It also explains the brand of "Christianity" that the pious frauds over at the Watauga Conservative actually practice: if you remove the humanity of your enemies, reduce them to hated germs, then you can safely advocate for their extermination.

You can also safely ignore the hundreds of Democratic and progressive votes in those other 16 precincts that NewGuy pretends to see as "pure" red. You can also conveniently ignore that Watauga County has swung decidedly Democratic as a whole in several past election cycles, and will again.

But never mind. Let's play out the solution to having a "liberal cancer" in the heart of your real estate. Let's close Appalachian State University and scatter all those students to other cesspools of sin and exile those radical professors to states that might appreciate them. Yes, let's! Then we'll see how all you developers fare with your rental properties and your cash flow. While we're at it, let's shutter the Watauga Medical Center, since it's full of over-educated professionals who tend to vote Democratic.

After you finish cutting out the "cancer," let's see what jobs, what economic opportunity, what prospects for the future are left to you cancer-free, short-sighted, and illiberal people.

Where are the Democratic voters?

" You can also conveniently ignore that Watauga County has swung decidedly Democratic as a whole in several past election cycles, and will again."

Did you mean like 2010 when both Dem legislatures were replaced with Repubs? And 3 Republican County Commission candidates were elected for 3 vacancies?

Or perhaps 2012, when Republicans added to their majorities at the state legislature, PLUS elected a Repub Governor and maintained a majority on the county commission?

Or the continuation of the trend in 2014 when we re-elected our two Republican representatives,and maintained our control of the county commission ?

Yep! Sure looks like things are swinging 'decidedly Dem'!!

Republican are too often takers and haters who want to call themselves Christian. They are the true cancer of our county spewing venom and helping only themselves. They know nothing of the decency actually preached by Christ. They would be driving off the mountain looking for work were it not for the university and other professional decent folks here voting as Democrats and creating the climate that makes Watauga County successful. It is part of why I live here.

Thanks, JW. I guess I was misled when your initial post seemed to suggest some more recent trends.

I stand corrected. You guys sure did a good job against Jesse Helms!

Unfortunately, Jimmy Hodges and a lot of other people have come to their senses since then. It's your current brand of liberalism that voters reject.

I realize the venom to which JWW alludes is spewed by a fairly small group, and usually I can avoid contact with it by ignoring the things posted on the so-called "conservative" site, but that sort of retrograde attitude across the county - and across the country among Fox News watchers - is making it increasingly difficult to live in the place I love. I was personally drawn to the campaign of one would-be county commissioner who suggested civility and discussion would be a better way to govern Watauga County. But, alas, it was not to be.

And I'm curious - just what is it they "conserve"?.....certainly not clean air and water. Not our natural resources. Not even our human capital, judging from the "conservative" attitude toward the poor, hungry, and homeless. And certainly not "values", as I overheard one person say, given the personal behavior of our state Representative. I resent their co-opting of the word.

Anon 7:22 p.m. Republican leaders conserve one thing - money for themselves and their friends. Unfortunately, just like Kansas, people here continue to vote against their own interests. They choose a carpetbagger, Jonathan Jordan, disciple of Art Pope, over the fair minded Sue Counts, who has a life time of service to others right here in the High Country, as compared to Jordan's lifetime of service to the pursuit of self-riches. A Christian, all right, in the mold of Franklin Graham, that great hater.

I guess negativity has a long history. I worry that young people will not want to go into public service. I hope that the example of Sue Counts and Josh Brannon will inspire.

Josh Brannon? Whose entire campaign was that Virginia Foxx was "mean"?

If their precinct map is correct, it looks like the ETJ areas voted majority Republican?

Anon 11:4 - hard to tell since they're included in other precincts.

The map and statistics behind it reflect ONLY voting on election day, which went 60-40 for Tillis. Early votes (56% Democratic) and mail-ins (an exact tie) are NOT reflected. There will be a new map in mid-December when those votes are allocated back to the precincts of the voter's registration (it won't be a whole lot different though, maybe two more blue splotches)

Maps like this are very misleading. They're like the maps that we see of the whole country, with most of it painted red, because states like Alaska, Montana, and Wyoming are HUGE compared to their populations, and it makes us think that SO much of the country is Republican. Empty land doesn't vote - people vote! Most of the population of Watauga County is clustered around Boone, but this makes it look like no one outside of the town votes for Democrats. It's just another way to divide us, while the rich make off with more and more money.