Phil Berger: Why Is This Man Grinning? 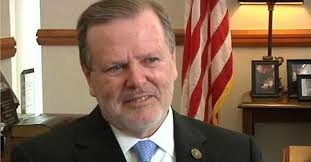 So federal taxes paid by North Carolina residents will continue to help expand Medicaid coverage in other states, while some 500,000 poor and the elderly continue to sicken and suffer without help in North Carolina.

If Berger is "agin it," it won't happen.

Doesn't matter what Governor McCrory wants to do. He's a paper tiger.

Doesn't matter what Thom Tillis said about reconsidering it. That was just a sop thrown over his shoulder as he decamped for Mugstomp-on-the-Potomac, the Emerald City.

Phil Berger ... the Father of Suffering.

People die needless deaths without good healthcare.
Berger and company have blood on their hands.

That's about as crass a comment as any I have seen, even considering all the liberal vitriol that is posted here--pure gutter snipe!