"You Can't Tell Me! I'm an Effing Corporation, Bitch!" 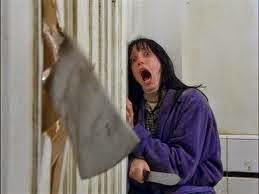 
"The justices' 5-4 decision Monday is the first time that the high court has ruled that profit-seeking businesses can hold religious views under federal law. And it means the Obama administration must search for a different way of providing free contraception to women who are covered under objecting companies' health insurance plans. If corporations can hold religious views (they can already have political views under Citizens United) then they could be opposed as a corporation to homosexual rights, trans surgery, abortion, medical coverage for anyone that isn't one-man one woman. This will cause liberals decades of headaches."

Can cause our democracy a few migraines too. Since, now, corporations are not only people. They can also be religiously bigoted people too.

The corporate take-over of the Republic must be 97% accomplished by now, no?

If corporations are people who can have religious beliefs, I assume they can also be declared mentally incompetent and committed against their will to a mental institution. I recommend that for Hobby Lobby.

Many corporations have religious beliefs. I have Christian beliefs and at times find it offensive when someone attacks my faith. Regarding Hobby Lobby, if you have a problem with their health insurance or their religious beliefs, then don't work there. That is pretty simple.

I guess corporations can marry, adopt children, divorce, and have sexual intercourse with each other? Since they've contaminated our food supply, make we can get them to start eating some of this crap. I think I saw a corporation eating at Hardee's this morning, come to think of it.

A woman can have contraception without forcing others to pay for it.
Liberals seem to equate the "right" to something as a requirement that others pick up the bill for it. By that standard, Democrats are denying women the "right" to eat at expensive restaurants simply because there is no government program (yet) that will pay their restaurant bill.

and their retirement plan includes contraceptive manufacturers, ergo, they profit from that they deny to women:

Religion shouldn't get in the way of making a buck. Go figure.

What I particularly liked about this abominable decision is that just like Bush v Gore, the Court claimed its decision has no precedential effect. That's contrary to the whole premise of the Supreme Court and shows what an abomination it now is. Come to think of it, just like the majority in Raleigh and just like our own Watauga County Commission majority.

I remember fondly the days when Southern Baptists hated Catholics. Now, five male Roman Catholics are imposing their ideas of morality on the rest of us, and the Baptists cheers their lungs out. I felt safer before.

That's my separation of church and state. I like my church - there every Sunday - but I don't want it dictating to my government.

The Hobby Lobby case is not about religious freedom. It is about a corporation wanting a government tax break for offering insurance that does not meet government standards. If Hobby Lobby wants to offer such insurance and NOT get a tax break, fine - employees can then decide whether or not to work there. But they should not expect a hand out (tax break) for doing it.

"A woman can have contraception without forcing others to pay for it."

You must not understand how insurance works. Everyone in the insurance pool pays for everyone else's claims as well as their own. Hobby Lobby seems to have no problem paying for insurance that covers Viagra so that old men can get it up - do you have a problem with that? Many women use oral contraceptives for other reasons besides birth control. Why did Hobby Lobby cover contraception in the past? Did they suddenly get more religion in 2012? I doubt it - someone urged them to file this suit to make a political statement against the Affordable Care Act.

betty white
You must have a problem understanding the recent case which is at issue here.

Hobby Lobby has provided health insurance to female employees for many years which included contraception. There is nothing about their case which would indicate that they have any intent not to continue to do so.

What they objected to was being required by the government to provide a particular type of contraceptive - the so-called "morning after" pill and similar pills designed to cause a fertilized egg to abort.


You should probably read the background of the case and the actual Supreme Court decision rather than rely on the talking points you are reading on the left wing web sites.

Many employees pay a portion of their own insurance premiums. I don't know if that's the case with Hobby Lobby, but I suspect that it is - I doubt that the company pays all of the premiums. So, there are women who work there who are paying for their OWN health insurance and are now being told they can't have access to legal products that most insurance covers. You folks still aren't answering the questions about covering Viagra and vasectomies. Why should these things for men be covered if women are denied access to products and procedures?

Betty White, I sort of like your thoughts regarding the ACA. It is about time someone stood up to the ACA.

If you feel okay about a morning after pill that will abort, then I guess you are okay with murder or are you more concerned with a woman's right to free contraceptives. In other words entitlement or a right. I do not believe the constitution gives us a right to contraceptives.

I think it is time to being concerned about the real problems in this world, not Hobby Lobby or any corporations stand on what is covered in their insurance plan.

I can see by all the post of Facebook that those opposing the decision by the Supreme Court don't have enough to do. How about making the world a better place.

Insurance is considered part of an employee's compensation. How does Hobby Lobby get off controlling how their employees choose to utilize their earned benefits?

"If you feel okay about a morning after pill that will abort, then I guess you are okay with murder"

Wow.... YOU are certainly making the world a better place with comments like that, aren't you? You should take your own advice.

The morning after pill can prevent an egg from being fertilized and can also prevent implantation in the uterus. It is not the same thing as an abortion - the egg may have never been fertilized. When a woman takes that pill, she has no way of knowing what is going on "down there" - there may not even BE a fertilized egg. You people who are against this think that women are taking these pills after they know they're pregnant! That's not how it works!

Dem 12: Just like people are making the world a better place constantly posting on facebook and everywhere, "oh poor me, I have lost my contraception". No, I am just being honest in what I believe. I am not sure my comments were any more harsh that what others post here.

Betty White: I actually have a problem with insurance covering a convenience drug such as the morning after pill. Why should insurance pay for such. Again, contraception is not a right and there is no where in the constitution that gives that right. My understanding is that the morning after pill "aborts" and perhaps I am wrong. My whole point in all of this is why the fuss, it is not a big deal. More things are important.

Here is a thought.. Do you work at Hobby Lobby? Then what is the big deal?

I guarantee you none of these people posting on this page work at Hobby Lobby and the same for the people who are posting on facebook.

What I detect is a lot of sour grapes by people who think they are entitled to everything.

"I actually have a problem with insurance covering a convenience drug"

Dem 12:
Women who work for Hobby Lobby can still have access to any and all contraceptives. Hobby Lobby will cover the cost of 16 of them. If they want the other four, they will have to find another way to pay. The Court decision only says that Hobby Lobby does no have to pay for those four.

AS far a Viagra and other ED drugs are concerned, I don't think Hobby Lobby should subsidize them. The men using them should pay out of pocket. But that was not the subject of this court case.