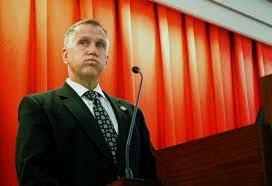 Does Thom Tillis appear to be flailing to you?

Wind-milling those arms of his in an attempt to connect with something -- anything -- that might resonate with the voting public ... and hitting nothing but soggy air.

Tillis wants to modestly raise teacher salaries by spending more money getting us all to buy more lottery tickets. No, really. The Tillis budget proposed by the NC House would increase advertising for the NC Lottery substantially in order to fund the raises for teachers. But officials with the lottery warned legislators that doubling the advertising budget for the lottery still wouldn't raise all the money that Tillis needs to pay the teachers, falling about $50 million short.

Meanwhile, North Carolina Republicans are on record as opposing all gambling of all kinds, according to their state platform, and they led the opposition to passing the lottery in the first place. Does Thom Tillis even know what his own party stands for?

Racial politics? Naaaaw, just a tiny slip of the tongue.

I DID hurry the hell up and have children. But they won't vote for him any more than I will.