Thom Tillis and the Gambling Industry: Trying To Keep the Bloodhounds at Bay 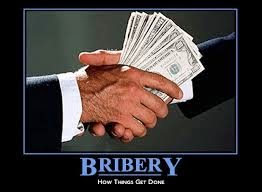 The North Carolina State Bureau of Investigation is investigating some $700,000 in campaign contributions to North Carolina politicians from the video sweepstakes (gambling) industry. "The biggest recipient was House Speaker Thom Tillis, who is seeking to unseat [Senator Kay] Hagan in November. Tillis received $127,000, followed by [Gov. Pat] McCrory and Senate leader Phil Berger [who received lesser but still substantial amounts]."

So what do Tillis and Berger do? They introduce legislation to take the State Bureau of Investigation away from Attorney General Roy Cooper and put it under the direct control of their patsy and yes-man, Gov. McCrory.

Yes, Virginia, that is a large and rancid rat you're smelling.

Rob Christensen writes, "Any hopes the [video sweepstakes] donors had of legalizing video gambling in the state again fell by the wayside because of scandal. The major donor from the industry was Chase Burns, an executive for an Internet sweepstakes company, who last year pleaded no contest in Florida to two criminal counts involving a lottery and forfeited $3.5 million in profits."

What's a little legalized bribery compared to all the harm this current Raleigh regime has done to education, the poor, our natural resources, etc.?