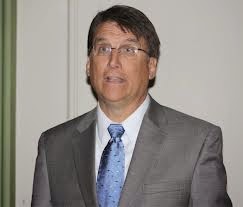 At which no Republican senator anywhere trembled in fear. McCrory issued stern warnings? So what are your going to do about it, Bub? Kick sand in someone's face? Or just continue to whine?

Republican Senate leader Phil Berger has had McCrory's sorry ass locked in his valise since Day One. Berger -- and to a much lesser extent, Thom Tillis -- is running this state, maybe even to Art Pope's surprise. Running this state into the ground.

You know, this bunch in Raleigh has had a lot of negative things to say about the budget under the Democrats, but those budgets were sound and...yes...balanced. And basic services were provided from our tax dollars to everyone in the state. The atmosphere in Raleigh THEN was much more businesslike than it has been under these clowns. AND the business climate was better.

People who don't believe in government should never be put in charge of government.

"People who don't believe in government should never be put in charge of government."

Amen!! This has always been the bottom line for me. Republicans claim to hate government and they say that nothing good can ever come from government, so why would we EVER put them in charge of it? We see the disasters they create whenever they're in power!