The Comedy Stylings of Aldona Wos 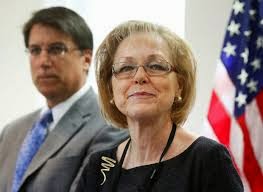 A $60 million shell game that was so transparent that even a Federal worker-drone caught it and blew the whistle.

Even our emperor Art Pope is said to be angry at Aldona Wos, and he so rarely stoops to give notice to mere mortals.


All of which is decidedly not surprising to anyone who has observed DHHS since Wos was appointed secretary in late 2012. From grossly overpaying personnel to stumbling through a food stamp backlog to being the only state in the country to halt food and formula to pregnant women and new moms (at least until someone noticed) Wos has displayed an historic and almost comic incompetence.