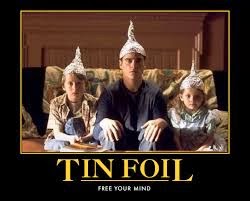 Some of us love a conspiracy theory more than butter pecan ice cream. Some of us subscribe to the sure-fire way of knowing a conspiracy is true: if there's absolutely no evidence, it proves that the cover-up is working!

62% of Republicans believe that the Obama Administration is secretly trying to take everyone’s guns away.

One in four Americans say that President Obama is secretly trying to figure out a way to stay in office beyond 2017 – including almost half of Republicans (44%).

Republicans (21%) are more than twice as likely as Democrats (9%) to believe that the U.S. government engages in so-called “false flag” operations, where the government plans and executes terrorist or mass shooting events and blames those actions on others.

Posted by J.W. Williamson at 10/02/2013 10:39:00 AM
Email ThisBlogThis!Share to TwitterShare to FacebookShare to Pinterest
Labels: Public Policy Polling, Republican brand