A little history from 2007: Citizens for Change formed primarily to fight the new Steep Slope Development ordinance and to rout the progressives in Boone. The PAC endorsed a slate of four candidates that year, one mayoral candidate and three town council candidates, one of them a multiple-term incumbent. Out of those four PAC candidates, only one of them won, but in the process their multiple-term incumbent (and most experienced public official) lost. (The Watauga Democrat did an eve-of-election run-down on all the candidates and the issues at that time. And please note that in 2007, Boone's municipal election was on the first Tuesday after the first Monday in October.)

The coverage of the Chamber of Commerce candidate forum that year in the Watauga Democrat makes interesting reading too, especially the report that developer Phil Templeton, Jeff Templeton's father and a prime mover in Citizens for Change, heckled incumbent candidate Lynne Mason from the audience.

We note that the Certification to Return to Active Status (pictured below) was dated October 3, which means that the PAC will not under current law have to report any contributions or expenditures until well after the election is over, in January 2014. We note that because the timing seems intentional, as though someone were willing to hide out until after the planned damage has been done.

For the record, in 2007 Citizens for Change raised $45,426.12 and spent most of it. That total in cash does not count what Phil Templeton individually spent on multiple newspaper ads (many of them full-page), though he was also a big donor to Citizens for Change.

Also for the record, and in case anyone has forgotten the full extent of current Templeton family power: Phil's daughter (and Jeff's sister) Anne Marie Yates is chair of the Watauga County Republican Party and is named in one of the charges currently pending against the Republican majority on the Watauga County Board of Elections. Anne Marie Yates is married to Perry Yates, a new Watauga County Commissioner, and she is sister of Mark Templeton, a candidate for Boone Town Council in the November elections. Mark Templeton made a Citizens for Change-style endorsement of Matt Long and James Milner at the candidate forum last Tuesday, and presumably it is this "Team Templeton" that will be the object of affection for the reactivated Citizens for Change. 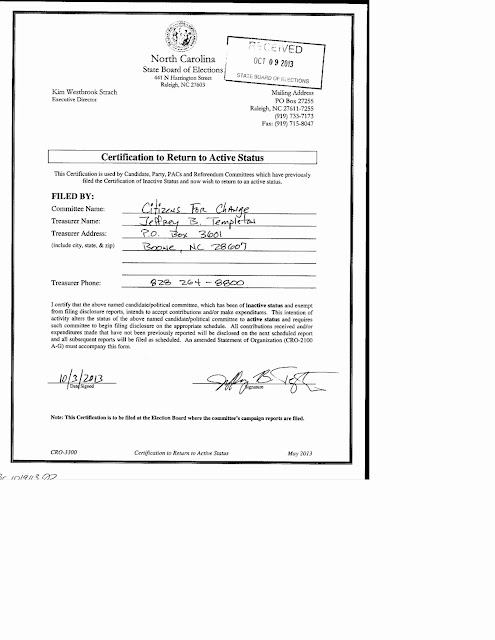 Apparently the Templeton family hasn't made enough money raping and pillaging the town. They need to control everything so that all the grandchildren can carry on the tradition.