Reproduced below is a letter from Stacy C. Eggers ("Four"), responding to a public records request filed by Kellen Short on behalf of the Watauga Democrat newspaper. It reveals, among other things, certain problems inherent in running the Watauga County Board of Elections behind the scenes (as revealed by the Winston-Salem Journal here and here, and while we're at it, this editorial too) while also providing privileged lawyer-client advice to that same board.

So here we are now, or at least were on September 27th, with the man who's been proven to be the author of everything presented and voted on at Watauga BOE meetings, including rewritten (sanitized) minutes (and while we're at it, this editorial also), and the man who sat down at his office computer while his little brother was conducting the August 12th meeting of the Board of Elections and wrote a letter to the State BOE while identifying himself as Luke Eggers ... here is Four Eggers now saying he is advising his little brother and the other Republican member of the BOE on what must be divulged and what doesn't have to be divulged.

There's a certain amount of gall involved in piously telling reporter Kellen Short that he's offered to advise odd-woman-out on the BOE, Kathleen Campbell, on what emails she needs to surrender, when word is that he would not answer earlier written questions from her about proper procedure, or help her in drafting a resolution for the board, because, he said, he's county attorney. On some days, being county attorney means not assisting the Democrat on the board, and on some other days, it means helping little brother Luke and Bill Aceto scrub go through their documents.

Buried in the second paragraph of the letter below is a pretty interesting signal that he's advised his little brother and Bill Aceto that any email correspondence between him, as County freaking Attorney, and little bro/Bill Aceto would be privileged (that is, not subject to public inspection), because when he writes to them, and they write to him, he's serving in the role of County freaking Attorney and not as puppet master to the Board of Elections. 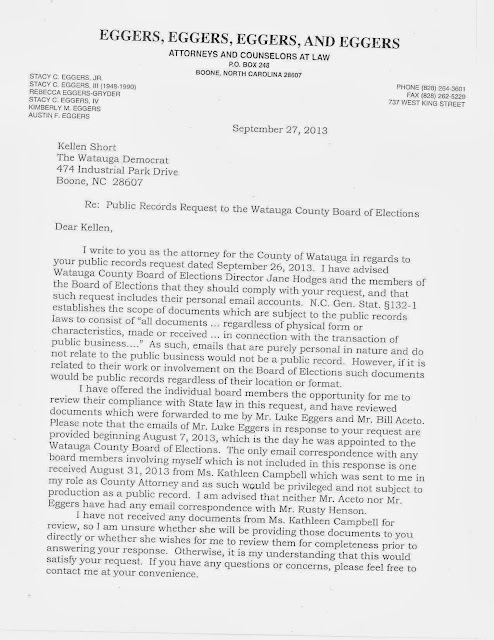 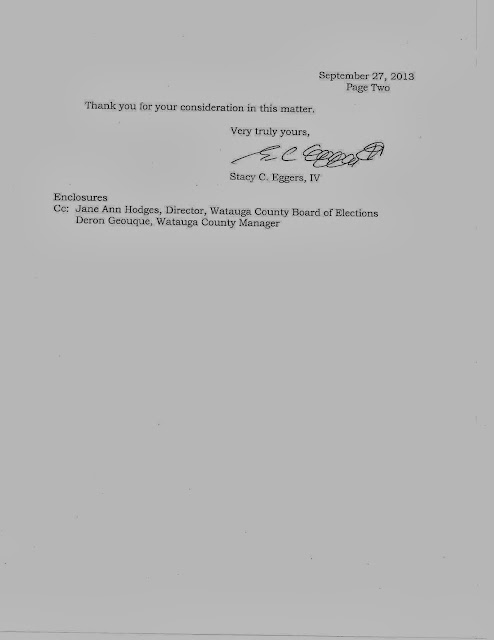 Interesting misstatement of the law by the county attorney. The section of the law which applies is below. Pulled another fast one.

§ 132-1.1. Confidential communications by legal counsel to public board or agency;

I would like to know how jerry got a copy of the letter sent to the news media? Everyone's assumption is true that YOU influence the local media and they are too biased to believe in fair reporting.