Anna Oakes gets on the money trail of Team Templeton in the Watauga Democrat, and Jeff Templeton is forthcoming on why his family has felt it necessary to bludgeon and then buy Boone's town government: They're doing it all to save Watauga County!

"We warned the town council that the over-reaching regulations could have the unintended consequence of encouraging large-scale apartment development outside the town's planning jurisdiction, and now we see that prediction coming true with The Cottages [of Boone]," sez Jeff.

Got that logic? Because Boone now regulates high-density development on steep slopes within its limits, all the obnoxious, destructive, and dangerous development moves out into the county (and Watauga County allows virtually anything). Therefore, O my Brethren, the Town of Boone is totally responsible for that hair-raising development on the ridge known as The Cottages of Boone. And for everything else you see in Watauga County that you don't like. 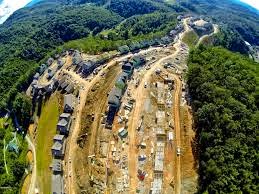 With logic like that, Team Templeton is going to make marvelous overlords! And with the money they've got they're clearly intent on doing whatever it takes to win. Just this week, we've heard of three different violations of the law committed by Team Templeton:

1. Stuffing their flyers into people's mailboxes -- a Federal offense

2. Putting out a flyer with a "Paid for" line listing a local business, which is also illegal under North Carolina law.

3. We are told that Mark Templeton was doing a robocall to cell phone numbers, which is another Federal offense.

I don't understand that logic either. He says that Boone was warned that the regulations would send development out into the county? So what is his point? He would rather see The Cottages inside the city limits than outside? Is he for or against that type of development? He is being deliberately vague, I think.

Any idea what the Templetons are up to with their land on Wilson Ridge Rd? Lots of activity there lately - wondering if student housing is being planned for that site? Big enough site for it - can't imagine what that will do for traffic.

bettywhite, you don;t pay attention, do you. Boone expounds the promise of "walkable communities" and eliminating "urban sprawl", but over regulates and opposes development to the point it kills the first and increases the latter.

Thanks for the insult, Anon. I can always count on you for a snide personal comment. What do you expect Boone to do about areas outside its jurisdiction? They have no control over what happens out in the county. We can blame developers like the Templetons for that!

You missed the point, bettywhite. Urban sprawl occurs when municipalities over regulate and overtax development. Development always runs from this in order to survive.

This is how Boone has driven projects out of town and killed the walkable community concept.

Drawing attention to the fact you're looking the wrong way is not insulting, although I guess the truth can hurt.

Anon 8:04/6:44: Sprawl in this area may indeed be due partly to town policies, exacerbated by the fact that it's basically a free-for-all in the county in terms of regulation. But it's also pretty well established that sprawl is happening everywhere in the US and that it's mostly due to us having a car culture, so trying to pin a development like The Cottages on the Town of Boone is one-sided at best. Bettywhite has a great point: if someone says or implies that The Cottages isn't the kind of development we want in the county, then how would it be any better if it was inside town limits?

Any please, don't pretend you weren't insulting in your earlier comment. I assume we're all adults here. Own what you say.

I do own what I say. Telling the truth as I did is not insulting.

We do indeed have a car culture. There foe for walkable communities to work, municipalities have to give developers incentives to create them. not only does Boone not provide these incentives, it places obstacles in the way of these kinds of developments.

Of course development goes in the areas that welcome it.

I was merely pointing out the contradiction between what Boone says and what it does. I also pointed out that bettywwhite and many others are either not paying attention to this, are incredibly naive, or are being disingenuous.

Anonymous, I know you don't give a shit about walkable communities or sprawl - you just seek to badmouth Boone all that you can. Boone is SO terrible, I know - that's why there have been so many people visiting here lately! Developers are used to dealing with various city, county, and state ordinances. They do it all the time, all over the country.

" Developers are used to dealing with various city, county, and state ordinances. They do it all the time, all over the country."

They certainly do. They build outside of the jurisdiction and taxable areas of municipalities that oppose development.

This is sometimes called urban sprawl. Some people like it. Some don't. It does not change the fact Boone talks one way and acts the other.

I am sure you do not care what I think as an individual any more than I do about your opinion on urban sprawl. The point is that you cannot legitimately support something with words and oppose it with deeds, as Boone is trying to do.

I don't think I ever gave my opinion on urban sprawl. I'd say that what we have here in Watauga is small potatoes when compared to the development that pops up around larger cities. But, usually in those cases, the areas around the cities are incorporated towns themselves, not rural or semi-rural unzoned areas like we have around here. What is YOUR solution, Anon? Is there any way that the "sprawl" can be minimized?