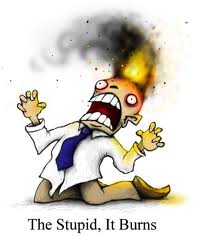 Corey Hutchins in the Columbia Journalism Review delves into how quickly the new Republican majority in the General Assembly, along with their patsy governor, are turning the clock back to the 19th 18th Century, and how difficult it's become for the state's news media to keep up with the action that counts ... i.e., seeing the forest despite the trees.

One bottomline: though NC GOP heads have swelled several times their normal size from the odor of their own complete power, their complete power is an illusion based on imaginary lines drawn on a map. Their power is the artificial result of redistricting, and like most artificial products, they're not built to hide their own artificiality indefinitely. Tawdriness reveals itself, like plastic flowers left too long in the sunlight.

But to recap the madness, the shamefulness, the frenetic backwardness of the Clown College in Raleigh -- which is all we can do, recap it, and insistently -- here's Mr. Hutchins's catalog of just some of the backward-clock-winding that has gone on in the new General Assembly:

Legislation has been proposed that would dole out prison sentences to women who go topless in public, allow public high schools to offer Bible study as an elective, and restrict access to abortions. A dozen years after the industry was outlawed amid concerns over predatory practices, there's a push to bring back payday lenders. Other measures would end teacher tenure, eliminate green energy rules, resume executions, and restrict the power of local government, especially in the state's largest cities. Unemployment benefits have been cut amid persistent high joblessness, and there's a proposal that would turn the state's corporate income tax from the highest in the Southeast to the lowest. There's a Voter ID bill, and another one that would penalize families whose college-age children register to vote at their campus location. There are proposals to allow hunting on Sundays―something that hasn't been permitted since 1868―and to raise the maximum speed limit for school bus drivers, and a group of GOP lawmakers recently tried to makeNorth Carolina's state marsupial the Virginia opossum. Asheville Citizen-Times columnist John Boyle even did a gag bit in which he challenged passers-by on the street to "name the fake bill" (most folks could not distinguish the made-up measure from the real ones).

Not included in this list ... the bill that will make citizens wait two calendar years for a divorce and the proposed bill to allow North Carolina to impose its own state religion.

Actually, the 18th century was the Age of Enlightenment. The founding fathers were considerably more progressive in many ways, than our clown college representatives. The current crop of Republicans are aiming for the age of feudalism, 14th century or thereabouts
.

Brushfire nailed it. Thomas Paine would skewer the medieval ideals of this lot.

In addition to creating stupid new laws, the legislature wants to cut one of the best investments in NC - the Rural Economic Development Center - which promotes and aids in job creation, infrastructure and allowing Rural NC to be self-sufficient. More info and petition here: http://tinyurl.com/bwbxz87

Yes, Brushfire, along with their Democrat colleagues.

I'm confused, Anonymous. Allowing people to get a divorce is somehow marching toward totalitarianism? Care to elaborate on that one?

Anon 10:02, how well do you know your Enlightenment thinking? Along with an emphasis on personal liberties -which focused on freedom of thought and conscience, btw, not gun rights- it championed reason and science over religion and superstition. That is much more in line with today's progressive politics than with the regressive know-nothing agenda of the far right.

I would be interested in how you define "New Age feudalism" and how you see modern progressive policies as leading to totalitarianism, because your use of both those terms leads me to think maybe you've bought into the unfounded conspiracy theories running too rampant these days on the far right. It does us no service as a society to have people raging against politically manufactured bogeymen while ignoring real threats to our fundamental rights - principal among these the right to vote, currently being curtailed by the legislature.