How To Stop College Students from Voting: Penalize Their Parents 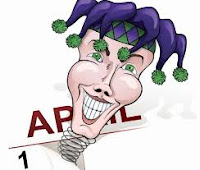 Another Day-After-April-Fools joke from the Republicans in the North Carolina General Assembly ... a new proposed law to take away parents' rights to list college students as dependents if those same students should dare to register to vote where they're in school.

Laura Leslie points out that this law is really aimed squarely at Watauga and Orange counties.

And if that doesn't do enough to eliminate the youth vote, then another provision in the bill should:


The bill would also require voters to have their vehicles registered at the same address as their voter registration. That could also cut down on college student registration, since many students maintain their vehicle registration in their home counties.

Why don't the Republicans just go ahead and pass a single omnibus law that says, once and for all, that only registered Republicans who pass the "Are You Sufficiently Conservative Test?" are allowed to vote in the state of North Carolina.

They obviously realize that they can't win on their merits. They can only stay in power by illegitimate manipulation of ballot access and outright voter suppression.

Then keep college kids from registering away from home.

Kids can't get home on Election Day to vote, the Republicans kill two birds with one stone. Can't vote in college town and many kids can't make it home to vote.

In case you are wondering where all this crazy legislation is coming from, google ALEC (American Legislative Exchange Council). Bill Moyers made a documentary about them called United States of ALEC. This is a group of businesses, lobbyists and state legislators from across the country who are making model legislation behind closed doors, and the companies funding ALEC are getting a tax break. Scary organization!

One of the sponsors of this bill is your very own Senator Soucek. Same Soucek who denied public comment to several parents at today's Senate Education Committee meeting.

There are about 15 lies posted either by JW or his devoted unthinking followers.

In terms of college students,at Warren Wilson College, students crossed the highway with their sixties blankets from Dorland to Sunderland even though they resided in Dorland and voted as Democrats. They changed the outcome of the commissioners race which is illegal. I wish they would fine the hell out of them and their parents.

The committee hearings were hampered by woman and children covering their face with scarfs.
The protestors should have been arrested on the spot. Tell the truth and tell really what happened.

JW is a low life piece of crap who tells half truths and scares politicans' families. Dirt Bag

No, JW. I submit to you, when you analyze the county votes, you will see that without the college vote, and the extra days for them to vote, then you, the Progressives, cannot win.

You need those lopsided advantages and the college vote in order to have a chance at winning in this county.

Good job, Mr. Soucek!!! Dual residency should not be permitted. You either live one place or the other.

What is apparent is that Republicans care less about small d democracy than about power. With power they can keep Art Pope in charge of the puppet McCrory and the budget, and with that combination they are doing a great job of shifting the State's resources from the poor to the rich. What fine Christians they are.

ALEC is also the force behind the anti-city agenda that is taking over the state, including right here in ol' Watauga County, with our corrupt county commission (in bed with local developers, of course).

Regardless of tax dependent status, college students ARE legally resident where they attend college. The census rules are very explicit - they HAVE TO BE COUNTED at their college location. THIS IS THE LAW. The 2010 census was the basis for the redistricting performed by the NC legislature in 2010. So the NC legislature used their college addresses as their legal residence for representation. It also allows that local area to collect state and federal funding (for things like water, sewer, roads) based on that population. THIS IS WHY college students are legally allowed to vote where they reside for most of the year. It is illegal to prevent them from doing so. Meanwhile, residency is a separate legal issue from tax dependency. Ask any parent paying child support - if they provide more than 50% of the support for a child living with the other parent, then they legally get to claim the child in their taxes as a dependent.

You are correct, Anonymous 9:11. This is the reason the property evaluation method is more equitable to those that live in municipalities whose populations do not contain a preponderance of college students swelling their numbers, not to mention it is more fair to the property owners that pay property taxes.

Just which parent is living with the student in a college dorm?

If we are going by the state law, once the person declares residency, they have to change their driver's license and registration to their vehicle to the county of residence. Are the students doing that? NO!!!