They Get the Message the Republicans Are Sending 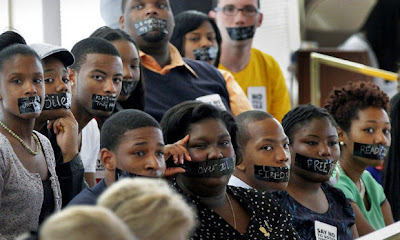 The scene in the NC House chamber yesterday as the Republican majority (with five Democrats, caught in the GOP eddy) voted for a law that will require photo ID in order to cast an in-person vote. (No proof of identity required if you vote by mail-in absentee ballot, which shows you that this measure is not about truthful elections but about crippling certain segments of the electorate.)

Photo by Chris Seward, in the Raleigh News & Observer.

NOTE
We're back to Five Goobers, as five Democrats ended up voting for the bill on passage: William D. Brisson of Dublin, Ken Goodman of Rockingham, Charles Graham of Lumberton, Paul Tine of Kitty Hawk and Ken Waddell of Chadbourn.

I wonder what Art Pope paid for that?