Time Out While a Republican Senator Puts Us in Our Place

Senate Bill 287, which would let local governments shift their legal notices from local newspapers to the Internet, passed through an NC Senate committee Tuesday, but not before producing one of the more iconic quotes from this current session of the NC General Assembly.

Several newspaper executives from around the state were on hand at the committee meeting to argue that newspapers offer the best chance to get information to the public. They said many people, particularly in rural areas, would never see the legal notices if they’re only on a government Web site.

“It’s obvious … that the Senate leadership is targeting the newspaper industry to inflict financial damage on the industry and the public’s right to know,” said John Bussian, counsel to the N.C. Press Association.

Todd Allen, publisher of the Wake Weekly, said the measure appears motivated by Senate leaders who “don’t like newspapers and their coverage.”

From coverage of the incident in the Burlington Times-News:

The committee passed the measure by voice vote. Bussian, the press association lobbyist, said the committee voted 6-5 to reject the measure. [Sen. Tommy] Tucker, the chair, rejected a subsequent appeal for a show of hands and declared the meeting adjourned.

At that point, Hal Tanner, publisher of the Goldsboro News-Argus, approached Tucker. He told him he thought the vote was handled in a manner inconsistent with Republican stands for open government.

“I said, ‘We just got through dealing with Jim Black,’ ” Tanner later recalled, referring to the former Democratic House speaker jailed on corruption charges.

Later, in an email to members, the press association quoted Tucker telling Tanner: “I am the senator. You are the citizen. You need to be quiet.”

While many are charging that S 287 is a Republican attack on a press they don't like being monitored by, says ProgressNC, "the sadder truth is that this will make it all that much harder for citizens to find out about key meetings and hearings involving the very issues that affect their lives the most: zoning, local utilities, taxes, and more. If this bill passes, it will be very, very clear that the NC Senate has no intention of working for the public good this session." 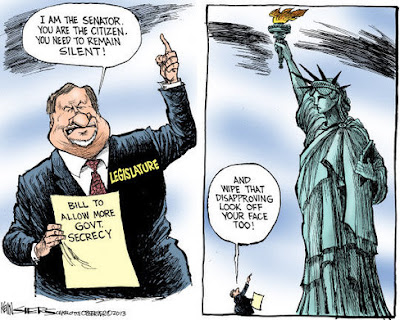 Perhaps Tommy will soon realize that some public notices already are on "the Internet" -- including the ones that notify the public that Tommy is an arrogant SOB.

Maybe Tommy realizes that the internet is a growing source for news and that newspapers are dieing off. The problem is with he requirement to publish notices in a newspaper instead of a news source such as the High Country Press. Both serve the same purpose.