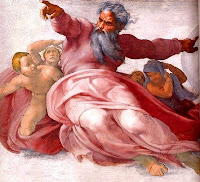 Gov. Rick Perry (R-Tex.) got testy yesterday with a reporter, and some surprising news about Jehovah leaked out from the man who apparently knows Him best. The event was a "free enterprise" conference hosted by the U.S. Chamber of Commerce to push deregulation and anti-tax policies. During a press conference, an uppity reporter raised the BP oil disaster, the Massey coal mine disaster, and the misbehavior of Big Banks as a pattern which suggested that society might be better off with a little more regulation. Gov. Perry got so pissed he mangled his syntax:

We don't know what the event that has allowed [sic] for this massive oil to be released. And until we know that, I hope we don't see a knee-jerk reaction across this country that says we're going to shut down drilling in the Gulf of Mexico, because the cost to this country will be staggering .... From time to time there are going to be things that occur that are acts of God that cannot be prevented.

Gov. Perry didn't attempt to explain why God would act so unilaterally against British Petroleum.

The "God did it" explanation is perhaps slightly less inflammatory than the line Rush Limbaugh and Fox News have been pushing ... deliberate sabotage. Apparently, the foreign-born terrorist Barack Obama donned a wet suit and swam silently up to the Deepwater Horizon, 50 miles out, and ... Well, you know the rest of that sordid story!
Posted by J.W. Williamson at 5/04/2010 09:11:00 AM
Email ThisBlogThis!Share to TwitterShare to FacebookShare to Pinterest
Labels: Fox News, oil industry, Rick Perry, Rush Limbaugh

From time to time there are going to be things that occur that are acts of God that cannot be prevented.* Rick

As for Obama donning a wet suit and swimming out to destroy the oil rig, Joe told him it was a "good f**king idea!

Yep, it's time to drill on shore.

It's really funny how information gets so distorted. The link provided goes to a left wing site that uses Media Matters for their source. It's no wonder by the time it gets here there is no honesty left. How about going to the source?

HD - We cannot trust the transcripts from Limbaugh's sites as they are edited and changed when he becomes uncomfortable with the response from his outragious absurdities.
I have noted this for myself in the past.

That's fine but why would you trust Media Matters? Why make a thread that describes what one site said that another site said that Rush said? You've gotta admit that's lame as hell on the poster's part.

BTW, I heard the show, the transcript is correct.

"BTW, I heard the show, the transcript is correct." -HD

You heard the Limbaugh show? Why am I not surprised?

AND you think your word is honest proof??
LOL!

HD - You forgot to read the part where I said I had observed this for myself. The point of my post is that the "source" in your example is unreliable. Limbaugh lies like a dead dog. Do you have any evidence that Media Matters posts lies?