The Politics of Fear 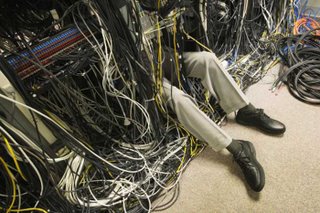 "Spying on Americans without warrants or judicial approval is an abuse of government power - and that's exactly what this [FISA Amendments Act of 2008] allows. The ACLU will not sit by and let this evisceration of the Fourth Amendment go unchallenged. Electronic surveillance must be conducted in a constitutional manner that affords the greatest possible protection for individual privacy and free speech rights. The new wiretapping law fails to provide fundamental safeguards that the Constitution unambiguously requires."

The FISA Amendments Act of 2008, passed by Senate Democrats on Wednesday and signed by President Bush yesterday, not only legalizes the secret warrantless surveillance program the president approved in late 2001, but it also gives the government new spying powers, including the power to conduct dragnet surveillance of Americans' international communications.

Gutless Democrats, who voted for this abomination:

We've already expressed our anger with the winning Democratic presidential nominee. We note that all the other Democratic senators who ran for president this year voted against this assault on our Constitution ... Clinton, Biden, Dodd, and the nominee of 2004, John Kerry.

We're giving what money we have to give to the ACLU. At least they're willing to stand up for freedoms guaranteed by the Constitution.
Posted by J.W. Williamson at 7/11/2008 08:55:00 AM
Email ThisBlogThis!Share to TwitterShare to FacebookShare to Pinterest
Labels: American Civil Liberties Union, Barack Obama, FISA, Senate Democrats