Asheboro 'Drys' Get Religion About Zoning 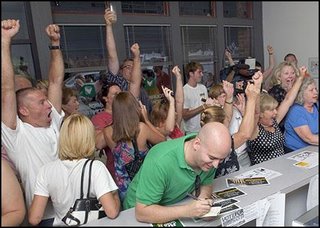 The most complete reporting we've seen is in today's Greensboro News & Record.

The most curious wrinkle to emerge ... the drys are vowing to fight for stricter zoning laws in the city of Asheboro. Wha? Turn away from sin, O my brethren, and turn toward ... the Z Word!

[Asheboro First Baptist Church pastor John] Rogers said Christians in the area should work for strict zoning laws for businesses that serve alcohol and attempt to put church members on the new ABC board. "Someone who won't be afraid to give the Christian perspective," Rogers said.

We'll second that motion for strict zoning laws, but that suggestion about putting Baptists on the ABC Board will take some thought. Where I grew up, you wouldn't necessarily entrust a Baptist with the keys to your liquor cabinet.
Posted by J.W. Williamson at 7/30/2008 10:27:00 AM
Email ThisBlogThis!Share to TwitterShare to FacebookShare to Pinterest
Labels: Ashboro, liquor by the drink