You may not have been following the legal arguments behind Trump's delaying tactic of seeking a special master in the purloined documents case, so you may have missed -- how could you? -- that Trump found himself a judge that he had appointed and who someone thought would be "loyal" to him.
Yes, apparently legal loyalty to "them what brought ya" is a thing. Bending the known law to appease an ego, and shielding a criminal from justice, whilst using as your implicit legal theory this proposition -- that this ex-president is above the law. Explicitly, Cannon ruled that Trump's position as a former president meant the seizure of those Mar-a-Lago documents carried a stigma "in a league of its own" and that any future indictment "would result in reputational harm."
Reputational harm.
You couldn't come up with a more compleat Trump judge if you hired multiple script writers and the best casting directors.
Judge Cannon, 41, is a graduate of Duke and the University of Michigan law school and a member of the Federalist Society. Trump named her a Federal judge in 2020, and McConnell's enthusiastic confirmation process had her in judge's robes by that November. She's a total novice, but she's clearly Trump's novice, and loyal to His reputation Awesomeness.
About the new legal territory that Judge Cannon seems intent on prospecting, and its obvious illegitimacy, Lawrence Tribe said, "She could either redeem herself by starting to act like a real federal judge unaffected by the identity of the president who appointed her, or earn the condemnation of national security experts and legal mavens by botching the biggest case most judges ever touch in a lifetime and endangering the lives of our spies abroad." (The super top secret stuff they found at Mar-a-Lago is what he's talking about -- "our spies abroad.")
Last night, in 33 tweets, Georgetown Law professor Heidi Feldman examined the facts and the Trump legal theory (if you want to call it something as coherent as "theory") and wrote the most interesting and informative analysis of the Cannon decision. Her conclusion, in tweet # 33: "We are horrified that a Trump-appointed judge repeatedly went out of her way to give Trump unprecedented and extraordinary protection from ongoing criminal investigation."

Heidi Feldman's explanation in 33 tweets:
I think it is hard for nonlawyers to understand just how distressing Judge Cannon’s rulings and arguments are. I’m going to set aside more technical aspects and try to explain accessibly. 1/
The key point to remember is that Donald Trump is under criminal investigation for breaking federal criminal laws. He’s not been indicted yet and may never be. Right now federal law enforcement is gathering evidence. 2/

As the subject of a criminal investigation, Trump has no more and no less Constitutional protection than any other ordinary person in America. 3/

All have rights not to be subject to unreasonable searches of their residences and seizures of property from them, per the 4th Amendment of the U.S. Constitution. When the DOJ (prosecutors) and FBI (police) decided to search Mar-A-Lago, they had to get to a search warrant. 4/

DOJ gave the magistrate judge evidence of their reasonable grounds for searching Mar-a-Lago for evidence of crimes committed by Trump. They had to name the possible crimes and explain specifically what they thought they would find that would show Trump committed them. 5/

The FBI did the search and got boxes of evidence relevant to the question of whether Trump had illegally taken possession of and otherwise mishandled government government documents. Basically, the relevant evidence is, of course, the documents in the boxes. 6/

If the documents are government records Trump retaining them is illegal; if the records are classified in various ways Trump taking them and storing them improperly is illegal in other, additional ways. 7/

To bring Trump to trial, DOJ would have to convince a grand jury the government has reasonable grounds to charge him with specific crimes. So, DOJ would want to show a grand jury documents that are government records, including classified records, taken from Mar-a-Lago. 8/
Trump, like any subject of a criminal investigation, wants to discourage the prosecutor, DOJ, from going before a grand jury and to make it hard for prosecutor to convince grand jury to vote to charge him with crimes. This averts a criminal trial. 9/
Since seized documents are the possible evidence DOJ would present to grand jury, Trump wants to prevent DOJ from even examining them to ascertain if they are government records. He wants to argue that DOJ cannot look at them. So he’s arguing they are “privileged.” 10/
Privileged means shielded from examination and use by the DoJ as part of building a case against Trump. If documents seized from Mar-a-lago are privileged, DOJ can’t use them. 11/
If enough documents are privileged, DOJ might not feel confident going to a grand jury or it might not have strong evidence that Trump had illegally taken/kept/stored government records, including classified ones. 12/
Different types of privilege protect different documents. For example, if some of the documents seized from Mar-a-lago memorialize legal advice Trump received from his personal attorneys, it is likely protected by “attorney-client privilege.” 13/
Attorney-client privilege exists to promote open communication between people and their lawyers, to ensure that people, especially those potentially likely to charged with crimes, get good legal representation. 14/
Another possible privilege, another possible way to shield documents from examination/use by DOJ in criminal investigation is “executive privilege.” Unlike attorney-client privilege, this one doesn’t cover too many people. 15/
Executive privilege pertains to the President, the head of the executive branch. It allows the President to withhold information from courts and Congress when releasing it would jeopardize the public interest. 16/
Executive privilege asserted in good faith makes sense: sometimes government records held by the president contain information that should be private to the president, not available to other branches of government, bc revealing the info would hurt the country. 17/
But, a president might not have the public interest in mind when she asserts executive privilege. She might want to keep records private bc they contain embarrassing info; or info that would show she committed crimes. 18/
While a president is in office, DOJ policy has been not to charge him with crime in any event, because that would be distracting and could be dangerous for the country. 19/
But now Trump is out of office, and so, just like all of us, potentially chargeable. This makes asserting executive privilege especially attractive to him. 20/
If a former president can assert executive privilege however he has a tool almost no other ordinary American has to shield himself from grand jury review, indictment, trial. Executive privilege could render him de facto above the law. 21/
Part of keeping presidents legally accountable, then, is not making it too easy for them to shield evidence of criminal wrongdoing from DOJ. 22/
In today’s decision, Judge Cannon permitted Trump to use assertion of executive privilege to at least delay DOJ examination of documents seized from Mar-a-Lago. 23/ 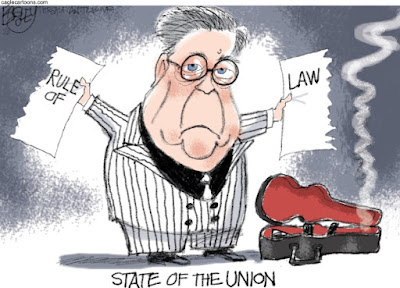 Cannon ruled that DOJ cannot look at the documents until a special master, an appointed judicial advisor, examines them and decides which, if any, are covered by executive privilege. 24/
There are all sorts of problems with this. First, how is a special magistrate supposed to decide what information is executively privileged? Obviously, can’t just rely on Trump’s assertions. Cannon gives no clues. 25/
Law governing presidential records says former president claiming executive privilege over records from her term should work with current president to ascertain if public interest requires keeping the records from courts and Congress. Ultimately, call is current president’s. 26/
Seemingly, current president via National Archives has already decided that public interest does not require that Mar-a-lago documents be kept under wraps. So, why is Cannon letting a special magistrate second-guess? 27/
Moreover, many legal experts, in and out of government, question whether a former president can ever be the one to assert executive privilege, on ground that only the current head of executive branch can. 28/
Trump is asserting executive privilege when he is out of office, subject of criminal investigation and his premises searched under warrant upon showing of reasonable grounds to believe evidence of crimes were there. Not a compelling situation to recognize the privilege. 29/
Instead Judge Cannon assumed Trump can assert the privilege and appointed a special master to decide which seized documents it covers, if any. She had many other options, including simply declining to decide the case. (I’m not explaining technicalities of jurisdiction here.) 30/
If DOJ pursued case to grand jury or trial, Trump could have raised executive privilege and exclusion of documents at those junctures. Instead Cannon has given his questionable assertion bite at a very early stage in a criminal investigation. 31/
Whether Cannon’s decision delays DOJ review of documents for long is an open question. It isn’t clear that the decision and its arguments will survive appeal, if DOJ chooses to appeal. But these uncertainties don’t affect the horror many lawyers have in reaction to decision. 32/
We are horrified that a Trump-appointed judge repeatedly went out of her way to give Trump unprecedented and extraordinary protection from ongoing criminal investigation. 33/33
Posted by J.W. Williamson at 9/06/2022 08:38:00 AM
Email ThisBlogThis!Share to TwitterShare to FacebookShare to Pinterest

If a special master is appointed, wouldn’t that person need security clearance to even look at the documents? Can another judge overrule this? I have so many questions.

An appeals court can overrule. As of this morning the DOJ had not decided whether to appeal. Apparently, the hesitation might be that the process of appealing may take longer than finding a special master, or the fear that the appeals court could uphold Cannon.

The power of a precedent to fuck up the future belongs to Gerald Ford who excepted Nixon and raised a president as above the law.

The older I get the more dispairing I become.

It'd be nice if the editor corrected my spelling error.

Is Trump entitled to the same due process, including the presumption of innocence, as any other US citizen?