Mark Meadows Has the Gall 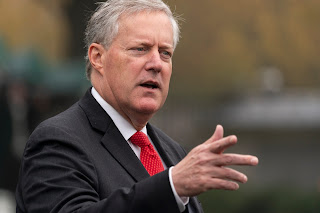 Former Trump Chief of Staff Mark Meadows, who's under investigation in North Carolina for voter fraud, has sued election officials in Lehigh County, Pa., for ... [suppressing my impulse to giggle] ... an "election integrity" issue (the use of ballot drop boxes).

We're currently at the 6-month mark in the NC State Bureau of Investigation's probe of accusations against Meadows -- that he voted absentee in 2020 using a Macon County address where he had apparently never set foot.

The Macon County Board of Elections removed Meadows from their voter rolls in April.

Posted by J.W. Williamson at 9/16/2022 07:21:00 AM
Email ThisBlogThis!Share to TwitterShare to FacebookShare to Pinterest
Labels: Mark Meadows