Nothing says rising tide of blue like watching professional conservatives suddenly losing their shit over they past statements about abortion. I quote at length here about Bo Hines (he of checkered past) -- because it's so damn juicy -- from the newsletter "Indy Daily" by Jane Porter, editor of IndyWeek, delivered as an email last Thursday morning: 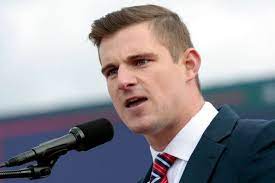 Here’s a funny thing: Bo Hines, the 27-year-old second coming of Madison Cawthorn who doesn’t like to be compared to Madison Cawthorn, has scrubbed his entire campaign website of any mention of his "pro life" values—but they featured heavily in his primary campaign for the Republican nomination for the 13th Congressional district.

Scroll down to the first photo in this newsletter for receipts. There used to be a whole page linked to Bo Hines’s position on "Life and Family" on his website that has now mysteriously disappeared. Web archives indicate that when you clicked the vanished link, a page would have popped up with the following statement:

"I am pro-life. I believe that life begins at conception and that we must protect the rights of the unborn. I also believe in traditional marriage. We must fight to protect our core family values that are rooted in biblical principles."

But you can’t find any references to Bo Hines being pro-life on his website anymore. Could it be that since the U.S. Supreme Court’s Dobbs decision came down in June, North Carolinians, including those in Bo Hines’s tossup district, have vociferously and via survey indicated their support for abortion access and reproductive rights?

Some polling certainly indicates that that’s the case: here’s Blueprint from earlier this month. Here’s a joint survey from WRAL and SurveyUSA from June.

Let’s not forget that before his primary—in which Bo Hines ran against and defeated DeVan Barbour IV, Kelly Daughtry, Renee Ellmers, Kent Keirsey, and three other candidates—he told the News & Observer that he would support legislation banning all abortions with no exceptions. Funnily enough, Bo Hines has been mum on the issue ever since.

How long before that video disappears from the website as well? The PPP survey shows Bo Hines running neck and neck with Democratic state Senator Wiley Nickel, both with 40 percent support from respondents and 20 percent undecided. So, go ahead—do the math, and place your bets now. DJT and a hardline anti-abortion stance likely won't play well in the new 13th district.

Have a great Thursday! Thanks for reading.

Posted by J.W. Williamson at 9/04/2022 07:11:00 AM
Email ThisBlogThis!Share to TwitterShare to FacebookShare to Pinterest
Labels: abortion rights, Bo Hines

No matter what the results of the election this year are, you lefties will have to figure out how you're going to live with all of Trump's supports.

Such as the ones in the below video.

No matter what you think, they are legion and living near you.

You're right. The fascists are legion in the Trump party and are proud to peacock their white nationalist sympathies.

I'm puzzled as to why the fascist have turned their back on democracy and embrace authoritarianism.

Ask Joe Biden. He's doing everything he can to silence the opposition to his agenda. A typical fascist trait.

IT IS THE WAY

Most want Trump because they want white men to stay in power against a future that says minorities will be the majority, in the not too distant future.

You know this. You have stated that Rhodesia was an example of good governance.

I don't know what silence of the opposition that you speak.

"Most want Trump because they want white men to stay in power against a future that says minorities will be the majority, in the not too distant future"

It's not so much white men, but Western Civilization. We have seen severe declines in longevity and standard of living and will see even greater ones this winter.

If non whites are so effing brilliant, why isn't South America, the Middle East and Africa havens of enlightenment and prosperity?

Rhodesia was not about 'good governance', but about bringing western civilization to a primitive society who in the end, only wanted to live as their ancestors did, full of violence, disease, corruption and misery.

You should read 'White Man's Burden" by Rudyard Kipling.

"Take up the White Man's burden—
The savage wars of peace—
Fill full the mouth of Famine
And bid the sickness cease;
And when your goal is nearest
The end for others sought,
Watch Sloth and heathen Folly
Bring all your hopes to nought."

Which is exactly what is happening.

Anonymous said...
I don't know what silence of the opposition that you speak.

A district judge has ordered the White House to surrender the emails of senior White House officials with social media companies over collusion to censor information about Covid and the 2020 election.

Maybe this will all come out in court, but no one will care.

The truth is out there.

Wolfie,
Now I suddenly understand why you're anonymous. Good Lord.