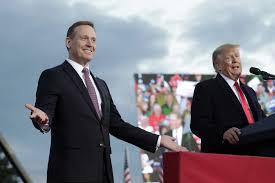 Asked now by three different news outlets whether he would accept the outcome of the November elections if he lost, Trumpist Senate candidate Ted Budd wouldn't say. Because as we all know now, elections are fair and honest when Republicans win. Otherwise, they're illegitimate.

From his seat in the US House, Budd voted against certifying the 2020 election on January 6th.

Democratic candidate Cheri Beasley's spokesperson Kelci Hobson told the N&O that Budd “has made a career out of subverting our democracy, from refusing to accept election results in 2020 and 2022 to calling the January 6th insurrection ‘just patriots standing up’ to opposing legislation to secure our constitutional right to vote. That’s dangerous and wrong for North Carolina.”

It's also the end of our democracy.

Posted by J.W. Williamson at 9/20/2022 07:27:00 AM
Email ThisBlogThis!Share to TwitterShare to FacebookShare to Pinterest
Labels: Ted Budd, Trumpism

We don't have a democracy; we have a Republic.

Any time the citizens are allowed to vote, it is a Democracy. You can boil it down further to a "Representative Democracy".
The term "republic" as used today refers to a representative democracy with an elected head of state, such as a president, serving for a limited term.
"Republic" as it's used to describe The USA is a category of Democracy.

Actually, given the fact that our local congess-varmints don't represent locals, just special interests, I'd say we have neither a Democracy OR a Republic at this point.

Wolf, we have a democratic republic. The people vote for their elected representatives, and the person who gets the most votes wins (well, except for President). Why do conservatives and libertarians always say what you said? What’s wrong with democracy?

Representative democracy? Like the Democratic Republic of the Congo? No thank you.

We are a Constitutional Republic with democratically elected representatives.

Democracy equals MOB RULE, with which the dems have done very well over the years.

Having a constitution means there are limits and restrictions on governmental power.

The point is, a republic with a constitution is there to preserve individual freedom and restrict government.

Hardly a concern for democracies, who always devour (figuratively) their fellow citizens who don't vote with the majority.

Much better to have an autocracy to protect like-minded, minority whites.

Why do conservatives and libertarians always say what you said? What’s wrong with democracy? Betty White

Majority gets their way, Irregardless of what it does to the minority. As with most liberals I meet, you think such a system would only be done altruistically. Conservatives and libertarians beg to differ.

What I have seen in my life is this: Democracy is wanted by altruistic, caring, well-intentioned but ultimately self-righteous people who think everyone would believe what they do if only the opposition knew how wrong they were.

But, it is also desired by those who think they can manipulate those feelings of altruism and caring into giving themselves more power by getting more votes.

THAT is the great danger.

People use your emotions, your desire to make things better, into power over others.

That is what democracy is all about, power over those less powerful, or less numerous, then you.

So, if someone is brilliant, capable and works hard to support themselves, their families, their employees and community, the majority might be jealous of that. It's a recurring liberal theme and they want to tax or regulate his wealth because the majority isn't capable of achieving what this individual has, and therefore thinks it's 'NOT FAIR!!!'

This happens every effing day.

So, it's easier to vote with the majority to take from someone else, than to achieve it on your own.

Democrats will call the achiever 'greedy' or 'selfish' for creating and keeping his wealth.

But really, who is greedier. the man who works for his achievements or the majority who want to take it for their own benefit?

White grievance shouted from the rooftops.

That is quite a screed, Wolf. I don't know how you jumped from what I said to your comment, but here we are. I guess my question to you is, "If elections aren't decided by majority vote, then how do you think they should be decided?"

"Power over the less powerful"?? That could be the motto of the Republican Party.

" Why do conservatives and libertarians always say what you said? What’s wrong with democracy?"

My screed was an answer to what you asked.

Minority, white-christian, rule (similar to your beloved Rhodesia), gives you that "thrill up your leg". You will accept nothing less. Your weltanschauung excludes the rest of the world.

Okay Wolf. How about a straight answer to the other question: if our elections aren’t decided by majority vote, then how should they be decided?

BW, perhaps I'm not being clear. Voting is fine, majority winning is fine. What isn't fine is thinking that gives the victors carte blanche.

There must be restrictions on government power and guarantees of individual liberty or it is just mob rule.

Anon 5:20, you really should use a non de blog, unless you have run out of ideas over the years.

Who long has it been, anyway? Been sparring for a long time. Age doesn't seem to have mellowed you any, you really need to relax, enjoy life while you can because if I remember your beliefs there is no soul, no God, no afterlife.

So, why be so miserable for your one time in the ring?

Maybe some music will help you calm down. I'm sure you wouldn't like Baroque as I do, so here is some more modern music, and it's from another country!

This has over 271 MILLION views on their youtube channel, and it is posted on hundreds
more. It's extremely popular across the world.

And this one may be more your style. It has over 63 million views on their channel.

Enjoy, relax and watch the left burn the world down.

Short of storming the Capital, killing law enforcement officers in the Capital, using fraudulent and illegal means to overthrow a legitimate presidential election, and basically attempting to undermine democracy, explain how the left is going to "burn the world down".

Are you REALLY asking this?

US wealth is down 7.5 Trillion dollars since the Commander in Creep took office.

Inflation is over 8% vs. 1.2 % under the Orange Man. And interest rates were much lower also. I refinanced my home at just over 2% mortgage rate. It's now over 6%.

All of those democrats with retirement funds in the markets must be very, very happy. Especially the Union folks.

Sensible folks are not.

I remember watching, literally, the dems burning down Detroit

Except for Liberal Sanctuaries such as Martha's Vinyard, where people with multimillion dollar compounds having a dozen bedrooms, guest and servant quarters, well stocked kitchens and tons of money refused to help defenseless political pawns of that tyrant DiSantis.

Guess their racial quota of non whites was already full up.

Good thing for the Obama's.

This morning I was thinking about your question, Q.

My response was fast and flippant, but this really is a very serious problem and while I feel your intent was to showcase Trumpists illegalities and leftist superiority, it affects us all to our detriment.

I will try to keep this short so as not to bother JW.

What will burn the world down are leftists' politics, philosophy and actions.

The Green Agenda is a hoax. No way solar or wind is going to completely run a modern nation with a growing and healthy economy and population. Think about the energy required to recycle metals, or mine lithium and make batteries for your electric vehicles. It will not be able to maintain the current standard of living in many countries.

The identity agenda is turning the youth into sexually confused perverts and generational nulls. That is, they won't be reproducing, and if they do, their offspring will be more effed up than they are. Birth rates are dropping worldwide. So much for your grandchildren to comfort you in your old age.

The new global order, with leftist politicians, complicit corporations, media, academia and useful idiots led by such groups as the World Economic Forum are turning the world into a new feudalism. The difference between haves and have nots is increasing, and it occurs under dem admins as well.

Martha's Vinyard was a prime example of that, and the people there are among the left's elite.

Leftist dark money organizations (right wing ones are bad but in a different way) are funding candidates for elected office to destroy the system from within. The cities I mentioned above have DAs who refuse to charge for crimes against person or property, and the cashless bail system means these perpetrators are back on the street, often the same day, even if they are charged.

All of this means the leftist are a cult of death and destruction. Petroleum IS civilization. The left's war on abundant cheap energy will cause deaths from economic inflation, extremes of heat and cold and decreasing crop yields.

If the left TRULY believed in manmade climate change, they would be screaming at the top of their lungs for the government to do something about China and India.

There is climate change, has been since the Earth had an atmosphere, but is being used to control, extort and destroy modern culture and standard of living.

I know none of you dear readers will believe me, but this how the world dies.