The Flowering of Q in Waynesville 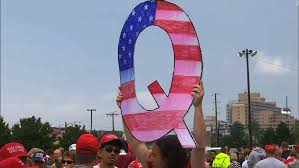 So this happened in Haywood County: An energetic woman in Waynesville, Darris Moody, who describes herself as a digital warrior, got a good viral case of internet poisoning on hyper-conservative websites and began faxxing bunches of anonymous (although one was signed “ThankQ”), threatening "arrest" warrants and legal-seeming "writs" to public officials that contained hair-raising possibilities -- like placing "bounties" of $10,000 and up on the heads of the letter-recipients and calling for "citizen’s arrests" of treasonous officials supposedly acting on behalf of the Deep State. Who got these threats? Easier to ask who didn't. The local Haywood sheriff (a Democrat) got one. So did some of his deputies, two county commissioners, the district attorney, three judges, the entire Haywood school board, every elected official in the town of Waynesville (along with three Waynesville public works employees), Canton’s mayor, the chairman of the Haywood board of elections, a few Asheville and Buncombe County officials, the Henderson County sheriff, several state Supreme Court justices, and the CEO and chief nursing officer of the Haywood Regional Medical Center. Anonymous (and meaningless) writs and warrants threatening physical and professional injury.

The FBI arrested Darris Moody on September 7. She's charged under the Interstate Communications Act,  which prohibits the interstate transmission of "any communication containing any threat to kidnap any person or any threat to injure the person of another." The judge let her out on an unsecured $25,000 bond, much to the alarm of the federal prosecutor. ("Interstate transmission" -- apparently Mrs. Moody included a few Washington, D.C., fax numbers and maybe some in Tennessee as well.)

Say you want to use the English language to put the fear of an angry right-wing God into the hearts and heads of a few elected officials. Where do you begin and what do you write? Luckily for you (and for Darris Moody), there's a whole website, “The People’s Bureau of Investigation,” which gave Mrs. Moody her templates and samples of "the peoples arrest warrants," fancied up in quasi-legal language. The website contains instructions on how anyone, anywhere, can “serve” the fill-in-the-blanks “writs,” and for every one served, the website promises compensation of $2,000. From whom the money will come remains unclear (but thank God there's a profit motive behind this craziness, although Darris Moody complained to a reporter that she had gotten nary a check for her good work).

Reporter Cory Vaillancourt of the Smoky Mountain News has been all over this story. In fact, it was Vaillancourt who pursued leads and uncovered the identity of Darris Moody, actually talking to her for an hour on the phone. The interview must have been a doozy:

Moody lives in a world of red pills and blue pills — not actual pills, but rather internet parlance for truth and ignorance, respectively. During a 50-minute phone conversation, she checked off nearly every single box on a long list of QAnon-style conspiracy theories.

She believes that COVID-19 is a psy-op, that the vaccine is a bioweapon and that masks are a tactic of the deep state, worn to obscure the very image of God.

She bandies about faerie-tale talking points from self-proclaimed “sovereign citizens.”

She claims that upon birth Americans are transformed or absorbed into a corporate entity and then are bonded, insured and controlled by the New World Order.

She promotes the idea that actor Tom Hanks is somehow part of it all, and that President Joe Biden isn’t “the real Biden” but has instead been replaced by a body double.

“Anybody can go look at pictures of him,” Moody said. “It ain’t the real one.”

Of course, she learned all this on the internet.

Vaillancourt published his investigation on September 7th under the headline, "Author of threatening writs revealed, but still no action from law enforcement" -- emphasizing "no action" because Vaillancourt had asked sheriffs in particular why they had not taken steps to stop the letters. Literally, hours after that article appeared in the Smoky Mountain News, the FBI moved on Mrs. Moody. Maybe local law enforcement can be excused because they knew the Feds were on it. Anyway, the Feds were.

Posted by J.W. Williamson at 9/15/2022 08:44:00 AM
Email ThisBlogThis!Share to TwitterShare to FacebookShare to Pinterest
Labels: Darris Moody, Haywood County, Trumpism

This girl is beyond Cray Cray!!!!!