McConnell Needs To Save This Guy's Ass

Indebted once again to Jane Porter and her IndyWeek newsletter: 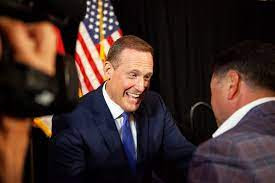 Mitch McConnell's Senate Leadership Fund is dumping $3.4 million into North Carolina's U.S. Senate race between candidates Cheri Beasley and Ted Budd, so now seems like a good time to remind everyone of why Budd, of all candidates running in 34 contested U.S. Senate races this November, is probably the most corrupt politician vying for a U.S. Senate seat this cycle. As a new website from the North Carolina Democratic Party details, Budd has been involved in a number of crooked deals, special interest funded travel, and financial scandals. He's also voted against the best interests of North Carolinians at most every turn. Here's a taste:Budd has consistently taken money from big banks, and then voted to allow banks to charge customers high fees and stymied efforts to lower costs for regular working people.Budd and his family screwed farmers out of $50 million in an agriculture scheme that went bankrupt and left more than $1.3 million behind in tax debt. We reported on that last September.Budd traveled on the special interest dime, taking a series of trips worth $30,000 to destinations like Miami, Palm Beach, and Oslo, Norway and staying in $900-a-night luxury hotels. Budd voted against legislation in July that would lower gas prices and protect consumers from price gouging by big oil companies. A day before, he had taken $5,000, the legal maximum campaign contribution, from big oil PAC Continental Resources Inc.Days before voting against H.R. 3, the Elijah E. Cummings Lower Drug Costs Now Act in 2019, Budd took $2,500 from GlaxoSmithKline's PAC and $1,000 from Pfizer's.This is all in addition to siding with predatory payday lenders after taking their money, voting against funding for child abuse prevention services, voting against a bill to address the infant formula shortage, and initially voting against a bill to assist veterans.Not great! Sometimes it's just helpful to keep all the corruption catalogued in one place.