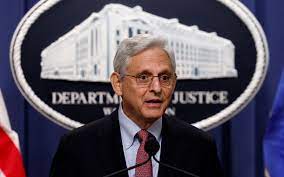 Yesterday, Attorney General Merrick Garland did not appeal to a higher court Judge Aileen Cannon's ridiculous order regarding Trump's stolen docs ... no, not yet. What he did yesterday was file a request that Judge Cannon "revisit her opinion," with an implicit warning that if she does not revisit its most absurd features, the DOJ will be filing an appeal with the 11th Circuit Court.(Isn't all of this back-and-forth a fascinating case study in how lawyers think -- especially the dumb ones like Trump's bunch -- and how smart lawyers handle a wrong-headed judge? Trump's lawyers may be dumb, because it's hard to be smart with an idiot for a client, but they're not suicidal: "Mr. Trump has claimed that he had declassified everything he removed from the Oval Office to his residence. But his lawyers have not made that same assertion in the courtroom, where there are professional consequences for lying.")

Helping me understand the finesse behind what the DOJ filed yesterday is Glenn Thrust et al. in the NYTimes: "Notably, the government did not file a motion to reconsider [as opposed to a "motion to revisit"], a formal request for the judge to reverse her ruling. Such motions are notoriously hard to win, in part because they essentially ask judges to acknowledge they were wrong in making an earlier decision."

The department did not contest appointing a special master to sift through documents and photographs not marked as classified. Nor did it challenge Judge Cannon’s order preventing investigators from working with those files until they were cleared by the special master, although it said it disagreed with that part of her decision, too.

Instead, prosecutors asked Judge Cannon to grant them immediate access only to the classified material, arguing that her ruling had been based on concerns about Mr. Trump’s personal materials — including medical and financial records — that were swept up in the search.

“The classification markings establish on the face of the documents that they are government records, not plaintiff’s personal records,” they said.

Prosecutors added that Mr. Trump has no right to have classified government documents returned to him and there is no plausible claim that any are subject to attorney-client privilege.

The latest DOJ filing very skillfully shows how legal argument and process can make it hard, though certainly not impossible, for judges to simply do whatever they want. 1/

There are some unspoken layers to DOJ’s central position, which is that documents marked classified are both the ones most needed for criminal investigation and least arguably covered by any assertion by Trump of atty-client or executive privilege. 2/

DOJ tells the judge that if [she] puts off imposing the special master process with regard to the classified documents, DOJ will refrain from appealing the judge’s overall ruling. 3/

This allows the judge to walk back from most problematic parts of her arguments and their most unwise implications without requiring her to accept that she is wrong about everything she said. That’s smart advocacy. Judges are human and don’t want to admit to being all wrong. 4/

Even cannier, DOJ is telling the judge they won’t put her in the position of possibly being told by appellate she’s all wrong if she adjusts her treatment of the seized classified documents. 5/

By carefully explaining why law as applied to current facts favors judge allowing DOJ to use classified documents right now, DOJ has previewed for the judge arguments it will make on appeal, so judge can see how persuasive they may well be. 6/

Suppose, though, that Judge Cannon is so wedded to delaying the criminal investigation she refuses DOJ’s motion to allow immediate use of classified documents for that purpose. She could simply deny DOJ motion without explanation or by giving weak reasons. 7/

DOJ will still have gained. Its motion gives appellate court a heads up on potential timing of the appeal and lets appellate court see how it can, if it wants, overturn Cannon re classified docs while giving Trump every chance to get back personal records. 8/

DOJ alerting higher courts that upholding Cannon would mean courts having to say outright that a former president can assert executive privilege against incumbent to stop present executive from investigating theft of classified documents related to national security. 9/

No matter how much Trump-appointed appellate judges or right Supreme Court justices might want to shield Trump from criminal prosecution, that’s a pretty difficult conclusion for them to have to commit to. 10/

Ideally, would be better if DOJ did not have to expend time and resources on dealing with Cannon’s misguided decision to impose special master and enjoin use of seized documents for criminal investigation. 11/

It is especially valuable at this moment in American history, for DOJ to be showing how legal argument and process can be used to hinder judges from simply insisting on an outcome the judge would like to order. 12/12

Posted by J.W. Williamson at 9/09/2022 08:52:00 AM
Email ThisBlogThis!Share to TwitterShare to FacebookShare to Pinterest
Labels: Donald Trump, Merrick Garland

Amen to the twelfth point.