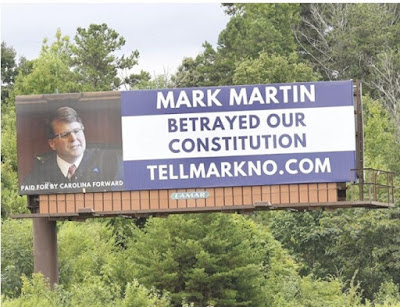 It was very recently announced that former NC Supreme Court Chief Justice Mark Martin was returning to North Carolina to become the founding dean of the brand new High Point School of Law. When Martin resigned his seat on the NC Supremes, he went to become dean of the law school at Regent University, the school founded by evangelist and Jehovah whisperer Pat Robertson.
Then came this bombshell news: The New York Times reported that Martin served as an informal advisor to Trump in the days following the election and supported an unsuccessful lawsuit that sought to overturn Joe Biden’s wins in Georgia, Wisconsin, Pennsylvania, and Michigan.

The Washington Post reported that Trump spoke with Martin on Jan. 6, 2021, the day Trump supporters overran the U.S. Capitol. Martin has repeatedly declined to comment publicly about his involvement.

Martin’s appointment as dean has raised eyebrows since it was announced in June. Last month, the editorial board of the nearby Greensboro News & Record chided Martin and the university for failing to "address the brontosaurus in the room."

Carolina Forward intensified the debate this week when it purchased an interstate billboard near High Point University saying, “Mark Martin betrayed our constitution.” Carolina Forward is pressuring High Point University (which is affiliated with the United Methodists) to rescind Martin's appointment as dean of its law school.
“Mark Martin’s repeated attempts to help Donald Trump steal the 2020 election were a blatant violation of basic Constitutional principles,” said Blair Reeves, Carolina Forward’s Executive Director. “Martin was an eager and willing participant in an effort to overthrow a duly-elected American government, and helped inspire the horror of January 6th’s right-wing terrorist assault against the U.S. Capitol. He is no longer fit to practice law, let alone guide the course of legal education based on a Constitution for which he shows pure contempt.”
Posted by J.W. Williamson at 8/19/2022 07:11:00 AM
Email ThisBlogThis!Share to TwitterShare to FacebookShare to Pinterest
Labels: Carolina Forward, Donald Trump, Mark Martin