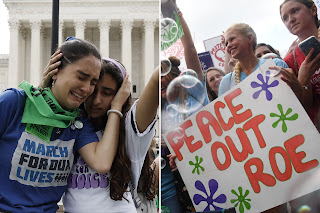 A law prohibiting abortions after the first 20 weeks of pregnancy has been on the books in North Carolina in some form since 1973. But it has not been enforced recently. Federal Judge William L. Osteen Jr. of the Eastern District of North Carolina ruled the law unconstitutional in 2019, based on Supreme Court precedent at the time. Osteen's decision was affirmed by the 4th Circuit Court of Appeals in 2021.
Then came Amy Coney Barrett who joined all the Catholic boys on the Court, and they overturned Roe v. Wade.
Osteen reinstated the 20-week ban on abortions yesterday, essentially saying his hands were tied by Coney Barrett et al. "Under Dobbs [v. Jackson Women's Health Org.], there is now no constitutional right to a pre-viability abortion, thus depriving the injunction of any constitutional basis from which to enjoin the challenged North Carolina laws regulating abortion .... Neither this court, nor the public, nor counsel, nor providers have the right to ignore the rule of law as determined by the Supreme Court."
Attorney General Josh Stein had refused to seek the overturning of Osteen's original injunction. Stein had announced last month that the N.C. Department of Justice would not “take action that would restrict women’s ability to make their own reproductive health care decisions.” But BergerMoore were only too happy to take up the crusade against women's rights: “North Carolina’s abortion statutes are undeniably lawful under Dobbs, and there is no longer any basis for an injunction to shackle the state from pursuing its legitimate interests,” Berger and Moore wrote in their brief to Osteen.

So now North Carolina is minutes closer to midnight.