Reagan-Appointed Judge to Jan. 6th Rioter: "You're No Patriot!" 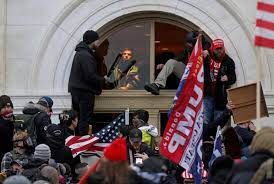 As he was about to be sentenced for his role in the January 6th attack on the Capitol, John Cameron, a real estate agent from the Seattle area, attempted to signal to the judge that he and the judge ought to be buddies: “Can you guess who my favorite president is?” Evidently, Mr. Cameron knew that Judge Thomas F. Hogan had been appointed to the Federal bench by President Ronald Reagan some 40 years ago.

When Judge Hogan stared at Cameron and didn't answer, Hogan proudly announced, "Ronald Reagan," as though he was due a dish of congratulatory ice cream (Rocky Road). The judge instead lowered the boom:

He had questions of his own. How, he asked, could Cameron claim to have seen no violence or clear sign he could not enter the Capitol during the riot? Did he not hear murderous chants and blaring alarms, smell tear gas, see people climbing up scaffolding and through windows? Did he think, as he said on Facebook, that it was all “fun”? And if so, was he withdrawing his plea to a misdemeanor charge?

“No,” Cameron replied, after a moment’s hesitation. “I picketed within the Capitol, and that was illegal. ... I would never do it again.”

That remorse seemed convenient and actually fake to the judge:

He compared the Jan. 6 rioters to “a lynching mob” in which the support of encouragement of more passive members like Cameron was crucial: “A mob doesn’t act alone.” ...

Hogan told Cameron that he was lucky prosecutors had not moved to charge him with a felony after his recent social media statements.

“If you had pleaded to a felony, I would just put you in jail for a long time,” he said. Instead he gave him 30 days in jail and three years of probation, as requested by the government, with the incarceration made intermittent to conform with his understanding of the law.

“The court at least hopes that in this three-year period, you don’t engage in any such conduct again,” Hogan concluded.

Whatya wanna bet he does "engage in such conduct again"?

Posted by J.W. Williamson at 8/18/2022 07:43:00 AM
Email ThisBlogThis!Share to TwitterShare to FacebookShare to Pinterest
Labels: Trumpism