Expand the NC Board of Elections


I can get on board with this proposal to expand the NC State Board of Elections to unaffiliated voters, but it's still unclear how an unaffiliated member would be chosen.
Jane Porter, in her daily email for The Indy Press Club: 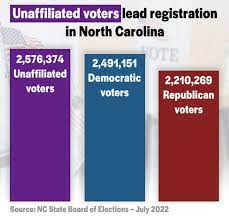 Here's an interesting development and something I'm surprised hasn't happened before: unaffiliated voters, the largest group of voters in the state, are suing North Carolina legislative leaders Tim Moore and Phil Berger for representation on the state's Board of Elections.

The lawsuit, filed in federal court by the good government watchdog group Common Cause this week, argues that excluding unaffiliated voters from the NC Board of Elections violates voters' free speech and equal protection rights under the U.S. Constitution.

From a WUNC report:

"The rise of the unaffiliated voter in North Carolina is being driven very much by millennial voters and now Gen-Z voters," confirmed Prof. Michael Bitzer, who chairs the politics department at Catawba College and is author of the book, "Redistricting and Gerrymandering in North Carolina: Battlelines in the Tar Heel State."

"In fact," Bitzer added, "among the youngest generational cohort, Gen-Z, almost 50% of them have registered as unaffiliated."

State law gives the sitting governor power to appoint three members from his or her party to the state elections board, and two from the other major party from lists submitted "by the state party chair of each of the two political parties having the highest number of registered affiliates" as reflected by the latest registration statistics published by the state board. The appointed board then appoints members to the bipartisan county boards, reflecting the same balance of power.

These bodies administer elections and safeguard voting machinery and records with the support of professional administrative staff. Phillips, of Common Cause, argued it is important for public perception that these powers not reside solely in the hands of people with partisan affiliations.

"In this time that we are in when, unfortunately, we are seeing a lot more attacks on our elections officials and how they are administering and operating our elections, hopefully having some kind of voice that is slightly different from being rooted in the political parties helps," Phillips said.

Not to say the current elections board, with its 3-2 Democratic majority, is doing anything wrong, Phillips added. But he said he hopes rewriting the law to allow for the representation of unaffiliated voters would give the public more confidence in the system.

Current voter registration numbers count 2,576,374 voters as unaffiliated, while 2,491,151 are registered as Democrats and 2,210,269 are registered Republicans.

I think expanding the board to include unaffiliated voters is a good move, for all the arguments laid out in the report. It would strengthen voters' faith in elections systems; it would give unaffiliated voters a say in the administration of elections, and it would make the board more reflective and representative of North Carolina voters, especially younger voters who tend to register as unaffiliated in higher numbers. It would also help tamp down perceived biases in decision-making (such as in the recent vote to keep the Green Party off the ballot, which split 3-2 along party lines; the certification of the party was later upheld after the board found sufficient valid signatures on a petition from voters).

Posted by J.W. Williamson at 8/05/2022 06:56:00 AM
Email ThisBlogThis!Share to TwitterShare to FacebookShare to Pinterest
Labels: North Carolina voter registration

First I've heard of this, and as an unaffiliated voter it sounds good to me.

I'd prefer all political parties be banned, but I'd settle for this.