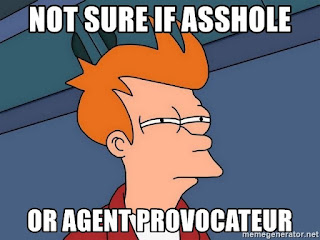 I might appreciate the warning letter from one Mark A. Murphy that was published in High Country Press, raising the prospect that "Woke Political Indoctrination" has infiltrated Watauga County Public Schools and is on the verge of making our children culturally and racially tolerant. I might appreciate it, but I don't, because it looks like pure unsubstantiated provocation. (And I get the Trumpist implication of capitalizing those words, Woke Political Indoctrination, like it's on a par with Marxism and -- eek! -- Unitarianism.)

Mark A. Murphy trails some high educational credentials after his signed name -- Ph.D. and J.D. -- but apparently missed class the day they taught using examples to make your argument clear. Murphy claims he's found multiple instances in on-line educational resources used by Watauga County teachers -- "...it is clear that the Newsela materials are filled with the concepts and language of Critical Race Theory, racial and sexual Identity Politics, and 'woke' political indoctrination" -- and I would surely like to see an example of what he's talking about. Murphy offers nary an example, not a single quote of this "wokeness" that alarms him.

No, he's throwing around hard-right lingo like a drunk throws chairs in a Saturday night dive-bar. And trying to stir up parental resentfulness, anger, and fear just for fun, apparently, or out of boredom. If he had an actual case to make, let him make it in clear terms with examples, and we'll make up our own minds.

So I had the same questions and went on line to look at some of the topics covered in the Social Studies section of the resource the write was concerned about (as being the most likely to illustrate "wokeness"). It looks like there are articles designed to have kids discuss how current conditions might be the products of our shared national history. Hmmmm. I dunno - it might prompt our kids have rational discussions about interesting or important topics and we certainly don't want that, or they might start thinking for themselves and deciding what kind of world they want to create for their families. (Note: I didn't see anything about 'sexual identity politics'.) The site is clearly designed to start discussions WITHOUT taking one side or the other on any given topic; and as I recall from my 6th grade debates during the Goldwater presidential campaign, kids WILL take different sides in those discussions.

But, wait a sec...let me go find my grandmother's pearls so I can put them on and clutch them appropriately.

I can't imagine why there is a national teacher shortage.