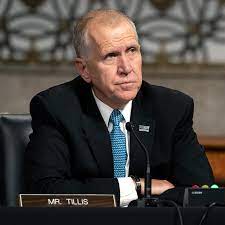 BREAKING: The Senate overwhelmingly gave the final sign-off this evening on legislation designed to aid veterans fighting diseases they believe are linked to toxic exposure to burn pits and other causes, particularly those who served in the Iraq and Afghanistan wars.

On a 86-11 roll call, the vote served as a political surrender by Senate Republicans, a week after they blocked consideration of the popular legislation seemingly out of political pique because Democrats clinched a party-line deal on an unrelated massive domestic policy bill that could be considered later this week. Former Daily Show host Jon Stewart can be credited with bringing plenty of heat and pressure on the Republicans.

One of the 11 no votes tonight -- Sen. Thom Tillis of NC. Sen. Richard Burr, who had previously voted no, switched to yes. Tillis voted no despite this part of the bill:

For North Carolina the bill has a special meaning. From August 1953 to December 1987, military members on Camp Lejeune and Marine Corps Air Station New River were exposed to trichlorethylene, perchloroethylene, benzene, and vinyl chloride in the base’s drinking water. The toxins led to birth defects, high-risks of cancer, and other health conditions.
A law specific to North Carolina prevented people exposed to toxins from suing more than 10 years after the date of their first exposure. Tillis helped do away with that law as state House speaker in the N.C. legislature, but it wasn’t retroactive. Tillis actually helped draft parts of the PACT Act -- what he just voted against again -- to aid veterans who were previously excluded from assistance programs. He helped write the PACT Act. He still voted no.