Rule of Thumb: In North Carolina, the More Pious the Politician, the More Prone to Corruption 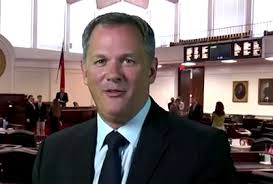 On the website for the Billy Graham Evangelistic Association you'll find a proclamation that Lt. Gov. Dan Forest is "Representing Christ on the Front Line." "His career and life are rooted in faith in Jesus Christ," we are told:

Forest believes the Lord has him in the political arena “for such a time as this” and that, similarly, the church must embrace its divinely destined role in a culture that has, in many ways, turned its back on God.

Forest knows exactly how everyone should be leading their lives, but he's become personally pretty dodgy on his connections to Greg Lindberg -- trying to distance himself from the high-rolling political donor now indicted for attempted bribery of a public official. Forest's spokesman told the News and Observer that Lindberg has never contributed to Forest’s official campaign account, yet Lindberg gave $1.4 million to the North Carolina Republican Council of State Committee, which Forest chairs, and Lindberg was listed on a Forest fundraising email as a maxed out contributor.

Plus Forest and Lindberg were obviously tight during the fall of 2017. The News and Observer found at least three events where they were hip-to-hip and the money was flowing:


An August fundraiser at what appears to be Lindberg’s house.
A September ribbon-cutting for one of Lindberg’s insurance companies.
An October 50th-birthday party fundraiser for Forest, the invitation of which listed Lindberg as "co-chair."


What does the Bible say about the love of money?

Posted by J.W. Williamson at 4/08/2019 07:45:00 AM
Email ThisBlogThis!Share to TwitterShare to FacebookShare to Pinterest
Labels: Dan Forest, Greg Lindberg