The Central Committee of the North Carolina Republican Party reportedly met for seven solid hours on Sunday, arguing over what to do about their top leadership. The state party chair, Robin Hayes, was recently arrested for attempted bribery of the state's insurance commissioner and is now under five federal criminal indictments. Hayes has been allowed to step aside from his duties, appoint an interim leader (Aubrey Woodard, who chairs the 11th Congressional District Committee), but also retain the title of "chairman" until the state party's convention in June. 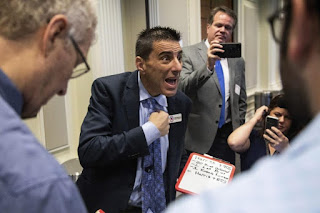 Executive Director of the NCGOP, Dallas Woodhouse, is also being allowed to resign at the conclusion of the June state convention. Woodhouse has been the pugnacious and rambunctious executive director since 2015 and has left plenty of roadkill in his wake. “I am under contract through the convention. When my contract expires I am moving on, which is always what I had in mind,” Woodhouse said.

Woodhouse admits that he testified to the grand jury in the Hayes bribery case but is not mentioned in the indictment. He has also claimed that the party did nothing wrong in laundering a large contribution from Greg Lindberg into the campaign account of the insurance commissioner.