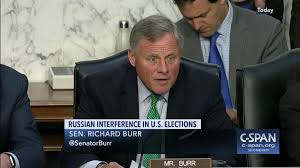 Some guys can't keep a secret.

On March 9, 2017, FBI Director James Comey briefed the "Gang of 8" on the progress of investigations into Russia's involvement in our elections. The Gang of 8 includes the heads of Senate and House intelligence committees, of which Sen. Richard Burr is one, in his official role as chair of the Senate Select Committee on Intelligence. Burr and the others learned from Comey that four, maybe five individuals were under active investigation, including Paul Manafort, Gen. Mike Flynn, “the Greek Guy” Papadopoulos, and Carter Page.

That was highly secret information. But turns out Senator Richard Burr is a gossipy little bitch.

According to meticulous notes taken by White House Counsel Don McGahn (or by his assistant), Burr talked to McGahn via phone on March 16 and spilled those names to McGahn, who presumably passed them on to Twitterman.

The Mueller Report documents all of that transaction in footnoted detail.

What does Burr have to say about that inappropriate leaking? "I can't recall." Followed by "if specific individuals were discussed" -- opening a crack in his denial as wide as a church door -- "it was just people that everybody already knew were being investigated." Really. Here's Burr's statement in part:

"Chairman Burr does not recall this specific conversation with Mr. McGahn in March of 2017; however, any conversations between the two would have been in reference to the need for White House personnel to voluntarily comply with the Senate Intelligence Committee’s Russia investigation," Caitlin Carroll, a spokeswoman for Burr, told NBC News in a statement. "If specific individuals were discussed, they would have been those known to the Committee, the White House, and the media. The Chairman’s stewardship over the Committee’s bipartisan and fact-based investigation over the last two years speaks for itself."

Burr's March 2017 spilling of beans to the White House was not the first time he carried water for Trump. In February 2017, Burr told The Washington Post that he had conversations with the White House about Russia-related news reports and had contacted news organizations to dispute articles by The New York Times and CNN. “I felt I had something to share that didn’t breach my responsibilities to the committee in an ongoing investigation,” Burr told the Post.

A lack of integrity and personal responsibility in protecting Twitterman from justice is going to be the death of the Republican Party.

Seems it might be a good thing Burr is not running for another term. Since he's having memory problems he might be in the running for a presidential nomination in a few more years.

Your phrase, "...gossipy little bitch" seems very sexist. A poor choice since the ones running to the White House with their bits of what they knew were men, not women.