Government Employee of the Year 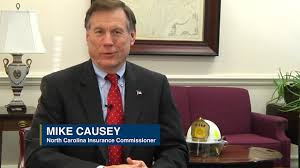 North Carolina's Commissioner of Insurance Mike Causey might just be a candidate for poster child of the year, something titled "Incorruptible Public Official."

As more information comes out about the indictment of big-bucks donor Greg Lindberg and his facilitator, Robin Hayes, Chair of the NCGOP, Causey emerges as a rock-solid honest man. Here's a relevant passage from the reporting by Paul A. Specht et al. published yesterday morning:


Causey said his involvement with Lindberg began in 2017 when the insurance department was conducting a routine financial examination of one of Lindberg’s companies....

“There were questions on some of the financials,” Causey said.

Lindberg, fast on his way to becoming one of the largest campaign donors in the state, donated $10,000 to Causey’s campaign in early 2017. Causey said the donation came “out of the blue,” but he directed his campaign finance director to return the money.

Later that year, Causey said he was told that Lindberg wanted to host a fundraiser for him. Causey declined.

“We were still engaged in the ongoing financial examination,” Causey said. “And it just didn’t look right.”

By then, he said, officials at the department had questions about the practices and financial health of Lindberg’s companies.

“There were loopholes being exploited,” Causey said.

Lindberg was throwing around the money, especially to Republicans (but why not? They were in charge of most everything) but also to prominent Democrats like Wayne Goodwin, who might want about now to be giving that money back.