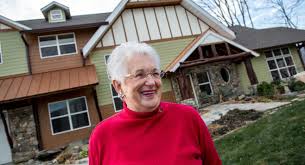 The U.S. Senate voted 93-6 to approve the FAA Reauthorization Act, which included the funding for roughly $1.68 billion for the Carolinas as recovery funds after Hurricane Florence, of which the Tar Heel State is expected to receive about $1.14 billion. With Senate passage, the relief bill went to Donald Trump's desk.

Why do people hate this woman so much? You have to ask?

What would you expect from the Wicked Witch of the West?

Her new mega-mansion on its lonely hilltop in Foscoe is of course perched well above the flood plain. Why should she care about the little people down below?

OMG Please do not tell my husband. He despises that lady. Heck, awhile back I saw a picture of tRump signing a bill that said women did not have to be paid the same as men and she was front row center with a big smile on her face. But in her defense there were other women in the picture too.

Did she give a reason?

She did vote for the hurricane relief $$ in the general spending budget (about $8m), but she did not vote for the FAA bill you note, which also had $1.6b for hurricane relief. Maybe she voted against it because she doesn't want Federal minimums for airplane seat pitches (i.e. 29"). She of the stumpy legs, as usual, doesn't care about others.