Kavanaugh Makes Excuses for His Temper 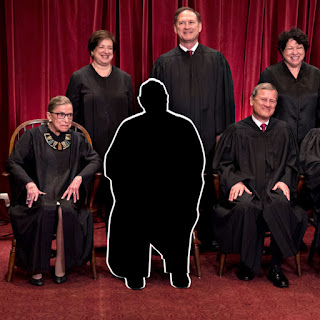 How long did it take Brett Kavanaugh to realize he'd laid a turd in the punchbowl last Thursday? However long it took -- a six-pack? -- you can read what resulted in yesterday's Wall Street Journal, titled by the paper, "I Am an Independent, Impartial Judge; Yes, I was emotional last Thursday. I hope everyone can understand I was there as a son, husband and dad."

He focuses entirely on emotion. “I was very emotional last Thursday, more so than I have ever been. I might have been too emotional at times. I know that my tone was sharp, and I said a few things I should not have said.”

He published the little essay in the Wall Street Journal for a very select conservative readership (paywall protected), including probably some conservative justices on the US Supreme Court who might be looking at the prospect of Brett Kavanaugh in one of their robes the way we look at the prospect of the radiator over-heating in the Mojave.

He wants the justices to know that his emotional outburst in front of the Senate Judiciary Committee was justified by righteous indignation. "They made me do it, by attacking my character. My character is righteous, but I have a temper, and surely you can understand the combination of those two things caused me to go too far, at least in the eyes of some."

That almost sounds like an apology, but he never really apologizes. He excuses.

He does not mention this partisanship, every word of which he uttered last Thursday:


Since my nomination in July, there’s been a frenzy on the left to come up with something, anything to block my confirmation. Shortly after I was nominated, the Democratic Senate leader said he would, quote, “oppose me with everything he’s got.” A Democratic senator on this committee publicly — publicly referred to me as evil — evil. Think about that word. It’s said that those who supported me were, quote, “complicit in evil.” Another Democratic senator on this committee said, quote, “Judge Kavanaugh is your worst nightmare.” A former head of the Democratic National Committee said, quote, “Judge Kavanaugh will threaten the lives of millions of Americans for decades to come.” ...

You sowed the wind for decades to come. I fear that the whole country will reap the whirlwind.

The behavior of several of the Democratic members of this committee at my hearing a few weeks ago was an embarrassment. But at least it was just a good old-fashioned attempt at Borking.

Those efforts didn’t work. When I did at least OK enough at the hearings that it looked like I might actually get confirmed, a new tactic was needed.

Some of you were lying in wait and had it ready. This first allegation was held in secret for weeks by a Democratic member of this committee, and by staff. It would be needed only if you couldn’t take me out on the merits....

This whole two-week effort has been a calculated and orchestrated political hit, fueled with apparent pent-up anger about President Trump and the 2016 election. Fear that has been unfairly stoked about my judicial record. Revenge on behalf of the Clintons. and millions of dollars in money from outside left-wing opposition groups.

And as we all know, in the United States political system of the early 2000s, what goes around comes around.... [official transcript]

I quote at length because Kavanaugh went on at length. His vitriol at "the Democrats" and the "left-wing" comes from a deep well of ... what? Resentment? Outright hatred? A dehumanizing contempt? These are the words of a partisan Republican warrior, not a fair, balanced, or impartial judge. He was delivering a warning: You will most certainly "reap the whirlwind" and "what goes around comes around." May we paraphrase? "You better watch out. You think I'm emotional now. Just you wait until I get one of your pet liberal government programs in front of me. Just you wait until the vast Federal regulatory infrastructure comes under my purview. Just you wait for my ruling on abortion and the other one on presidential powers. Then we'll see who's the snot-nosed brat."

The partisanship got no acknowledgement in the Wall Street Journal op-ed.

Posted by J.W. Williamson at 10/05/2018 08:18:00 AM
Email ThisBlogThis!Share to TwitterShare to FacebookShare to Pinterest
Labels: Brett Kavanaugh, U.S. Supreme Court

3 of his drinking buddies at Yale are now calling on the Senate to vote "No." Because they say Kavanaugh lied.