Berger/Moore Wants The US Supreme Court's Help. You Bet They Do! 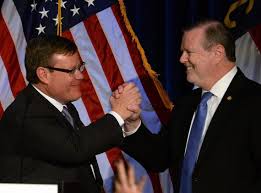 The Berger/Moore vandals in the NC General Assembly got their champion Brett Kavanaugh on the US Supremes, so naturally they now want to appeal to that bunch for a ruling: Our gerrymandering of North Carolina is just fine, right?

A three-judge Federal panel ruled last month that the General Assembly's latest congressional redistricting was an unconstitutional partisan gerrymander. The judges allowed this fall's election to go forward under the old maps but warned that this is the last time those maps will be used.

What an opportunity for Kavanaugh to begin repaying his partisan debts!