Sen. Meredith Just Woke Up From His Months-Long Nap, Sez ... "Who Put That There?" 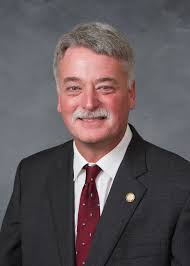 Sen. Wesley Meredith, one of Phil Berger's top lieutenants in Raleigh, just discovered ("No way! I couldn't have! I didn't!") that he voted for a really putrid constitutional amendment that takes away the governor's ability to appoint judges to vacancies and gives that power to Phil Berger. And his boys.

Or maybe Senator Meredith thinks he was egregiously misled, or blinded by the light, or was possibly dosed with a knock-out drug at the time(s) that he voted (repeatedly) to give Phil Berger the power over judgeships. Phil Berger and his boys, of which Wesley Meredith is one.

Anyway, at a public forum in the Cumberland County Public Library, Senator Meredith suddenly announced that he was against the constitutional amendment changing the way favored people get on the bench. Precisely no one at the forum asked the obvious follow-up -- "But didn't you vote for it, not only on final passage but also in committee votes, and in totally different forms -- the one ruled unconstitutional by a judge and the second version the Republicans put on the ballot November 6th along with five other putrid power grabs? Didn't you vote for that repeatedly?"

Rob Schofield at The Progressive Pulse got hold of Senator Meredith and did ask that question. Senator Meredith went into a kind of fugue state trying to explain the inexplicable. You have to read that interview.

For the election upcoming Meredith is threatened by Democrat Kirk deViere, who starred on WataugaWatch months ago. DeViere looks to be mounting an energetic campaign, while by comparison, Senator Meredith looks ... panicked. "Flummoxed" was the word Schofield used.

Know who else in the Senate voted for the amendment and all the other amendments, both in committee and on the floor and who hasn't apologized for any of them? Deanna Ballard of the 45th Senate District. Over on the House side, Jonathan Jordan did as he was told and voted for all of them too. No recanting from him.