Cannon Fire On the Right; And Young Republican Message Fails

We do follow conservative blogs in North Carolina. It's another way to take the barometric pressure, and sometimes we learn something. Or we hear something that makes us go hmmm and wonder at the turning of the heavens like on an axle.

Brant Clifton writes The Daily Haymaker down in Moore County. His bio: "...[He's] marched to the beat of a different drum from very early in life. The grandson of a Democrat party machine boss, Mr. Clifton registered Republican at 18 and campaigned for Ronald Reagan and George Bush. He worked for the late U.S. Senator Jesse Helms in Washington during and right after college.


"Mr. Clifton took on the liberal media as an analyst with The Media Research Center, then jumped into a lengthy career with the "drive-by media". His work has appeared in local newspapers in The Carolinas. He has done on-camera work for ABC's Good Morning America, and print work for national publications such as US News & World Report and People magazine. Mr. Clifton has also worked as a correspondent for AP, UPI, Reuters and Agence France Presse." [Beaufort County Now]

Unlike the numbskulls at Watauga Conservative, Clifton can be funny. He's always cutting and brings information (the verity of which I know naught), but his blinders are Tea Party, and I'd say he's on the mean end of that danceline. He insults people. Especially Republicans he considers too soft. And the Reverend William Barber.

So here was Clifton yesterday:

House Republicans are not battling to hold a super-majority.  They’re fighting to keep a majority period.


He says he talked to Republican operatives in Raleigh to reach that opinion. There's a concession, apparently, among insider Republicans, that they're going to lose their veto-proof majority in the NC House (which means Democrats will sustain Roy Cooper's vetoes, and the Berger-Moore bulldozer will lose its gas tank). There's real terror, according to Clifton, that they could lose control of the whole House.

Clifton brought his big guns yesterday for his longtime enemies in the top echelons of the Republican Party, particularly Dallas Woodhouse and his gang at the NC Republican Party HDQs:


[The reason Republicans are losing...] It’s a leadership and management problem.

House Republicans have a leadership cabal more interested in pleasing lobbyists than keeping the promises they made to voters. They’ve become what they replaced.

The state GOP is dominated by people who have been there since you could fit ALL the state’s Republicans in one phone booth. There’s more interest in obtaining and accruing personal power than there is in growing the party and helping the state.

That rings true, cause it's true for the Democrats too. It's true for any power that grows too big and turns crusty with age.


I guess we're calling the Tea Party the Trumpsters now, and the cracks against establishment Republicans are interesting in the middle of an election, particularly this election. Divided parties don't win.

Look at this sign that showed up all over Boone Tuesday night, on the eve of the start of Early Voting. 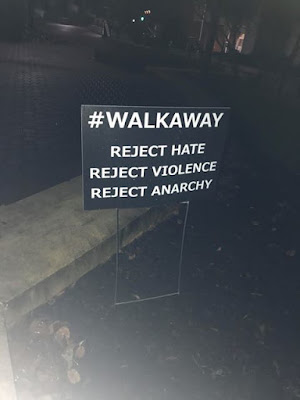 When I first saw that, and heard that the Young Republicans were putting them out, I assumed it was a revolt against Trumpism, a comment on Trump's rallies and his Twitter spew. Little did I know!

The signs were especially prominent on the campus of AppState, maybe because they were put out there, and all over town, by the ASU Young Republicans: 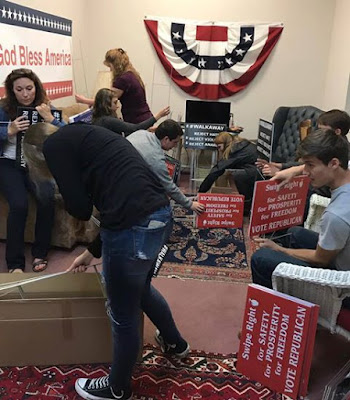 They're not Republican moderates. Apparently, the #Walkaway sign is making a cloaked reference to the Trump meme that Democrats now constitute a "mob." So I would have to grade the black sign a big ole message fail. Which is also a piece of interesting information about this current election: Republicans have no defense.)