Are You Hanging On for November?
Me too.

It's the only way to deal with the continuing cruelty of our government toward brown people seeking asylum. And the continuing lust for power by our Republican overlords in Raleigh, who are now proposing multiple constitutional amendments to keep themselves overlording us forever.

I've seen some good -- very good and just plain stupendously good -- campaign videos this year. I have to rank MJ Hegar's in that latter group:

It's Williamson County, y'all (and parts of Bell County), so naturally I feel some vested interest. It takes in much of Round Rock, Texas, a northern suburb of Austin, all of Temple, and much of Killeen. And the ranching country in between. It also contains Fort Hood, "the largest military installation in the world," which becomes interesting when we consider the military vet running as the Democrat (see above and below).

The Cook Partisan Voter Index rates the district R+10. Trump carried it by 13 points; Romney, by 21 (and when you think about it, that's a possibly significant drop-off in Republican performance in 2016). Sabato's Crystal Ball rates it "Solid Republican." Some 30,735 Democrats turned out for the primary in March, compared to 52,697 Republicans, which further displays dismal prospects for any ordinary Democratic challenger.

Incumbent Republican Congressman John R. Carter won his last reelection in 2016 with 58% of the vote. He's been in the chair since 2002, when the district was first created following the findings of the 2010 Census.


If you were casting a movie about the silly denizens of New York, and you needed a tall, chiseled actor to play the Texan who'll come in and tell everyone they're full of shit, you'd hire John R. Carter. He's prototypical Texas. You could use his portrait in a religio-political icon. He looks the part of the steely-eyed rounder up of strays, a bullshit detective, and a good man to have on your side -- all wrapped up in that John Connelly-esque visage.

Photos lie, though. He's actually quite short and may not be the fastest gun in the West (see above).

He trained as a lawyer at the University of Texas School of Law and had a successful private practice in Round Rock. He's pigeon-holed himself in Congress as part of the military-industrial feeding corps. He has personal big $$ investments in oil stocks. For a time, he was a prominent "birther" in his reaction to President Obama.

He has a well earned reputation for ignoring and shutting out his constituents (see the video above, for one example). "Mr. Carter will not hold town meetings, and he doesn't publicize his schedule so voters don't have a chance to engage with him on issues that matter to them," said a constituent who was so pissed off she was planning to run against Carter this year. She didn't, but MJ Hegar did. 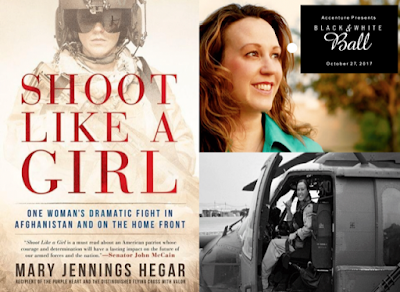 She describes herself as "an ass-kicking, motorcycle-riding Texas Democrat," and that'll play in the 31st District. She's an actual war hero. She has a Purple Heart (as well as the Distinguished Flying Cross with Valor) for combat in Afghanistan, where she piloted rescue helicopters. She's married now with two young children and lives in Round Rock.

According to her website, she was one of Newsweek's 125 Women of Impact in 2012, and she earned an MBA from the University of Texas following her military career. She's also been recognized by Foreign Policy magazine as a Leading Global Thinker. Plus she's got an Expert Marksman rating with both handgun and rifle.

Hegar wrote a well received memoir about her three tours in Afghanistan, Shoot Like a Girl, which was immediately optioned by Hollywood with Angelina Jolie attached to star in it. At this time, the movie is described as "in development" ... so who knows when, or even if. Even without the movie treatment, Hegar has earned celebrity status.

If the video above is any indication of how she interacts with the voting public, and if she can get that personality known in the district (let alone her personal history), she's going to be a contender in November.